Kelly Clarkson is gearing up to host the 2018 Billboard Music Awards on May 20, and she attended a promotional event for the big night on May 17 in Los Angeles. The mom of two looked better than ever, hitting the red carpet in a high-waisted leather skirt with long-sleeved, black and white top tucked in. The ensemble was incredibly flattering on Kelly, who bounced back incredibly after giving birth to her second child two years ago. The American Idol winner reportedly dropped 40 pounds, and she’s definitely showing it off lately!

Aside from the ensemble looking great, Kelly herself was absolutely radiant on the red carpet. Despite a heavy makeup look, she looked totally fresh faced and glowing. Kelly paired the edgy outfit with bold red lipstick and majorly winged eyeliner. We love seeing her look so happy like this! It will be Kelly’s first time hosting the BBMAs on Sunday, and with performances from stars like Jennifer Lopez, Ariana Grande, and Kelly herself, it’s sure to be an incredible night.

Meanwhile, there will be no rest for this hot mama once the show ends — because The Voice finale airs on Monday and Tuesday, May 21 and 22! Kelly has one artist, Brynn Cartelli, in the finals, and is looking to make a BIG statement with a win against Blake Shelton, Alicia Keys and Adam Levine in her first season as a coach. Brynn will be going up against Blake’s artists, Kyla Jade and Spensha Baker, as well as Alicia’s Britton Buchanan. 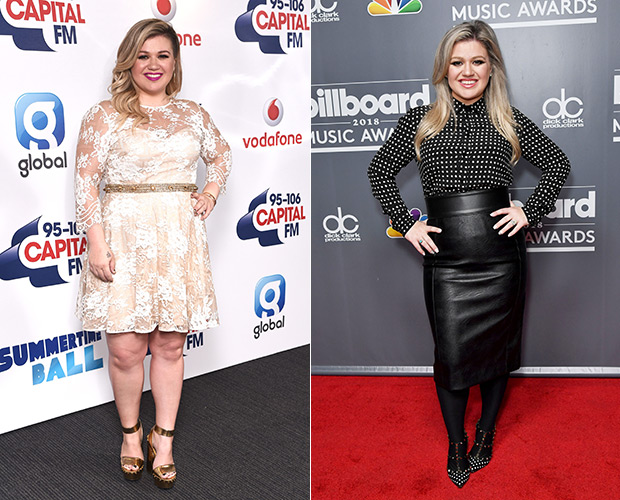 It was recently announced that Kelly will be returning to her coaches’ chair for season 15 of The Voice next fall. She’ll be sitting alongside regulars Blake and Adam, along with rotating coach, Jennifer Hudson. So awesome!