Blake Shelton, 41, has gushed about being a “stepdad” to Gwen Stefani‘s, 48, three sons countless times. He’s made it clear that he not only fell in love with Gwen over two years ago, but he also fell hard for her children — and it shows too! But that doesn’t mean the country crooner isn’t game to have a baby of his own with Gwen. In fact, Blake would reportedly “love” to become a biological father. So what’s holding him back? He’s apparently leaving it all up to Gwen! Click here to see pics of Gwen and Blake’s relationship milestones.

“Blake has fallen in love with Gwen’s kids and has a complete blast with them,” a source close to Blake shared with HollywoodLife.com EXCLUSIVELY. “He of course would love to be a father of his own but he is also a little scared about doing it as well. He is currently content with being a stepdad and is happy in that role.” If Gwen wants to get pregnant again though, Blake would be the first person to hop on board! After all, he’s been open about how much he enjoys “fatherhood.”

“The only thing that would make things different is if Gwen wanted to try having a baby with him, then Blake would be completely on board,” our insider explained. “He is not going to pressure her one bit but if she wants another, he will be gladly the one to try, and his hopes would be to have a boy. But the decisions on all of that are on Gwen and he is going to keep it that way.” 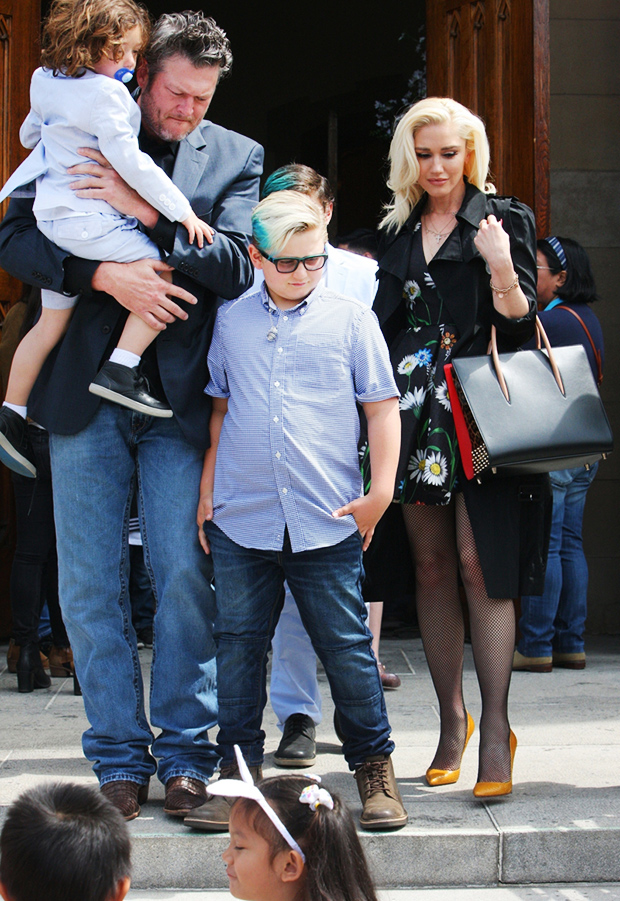 Over the weekend, on Easter Sunday, Blake and Gwen were spotted at church with Gwen’s boys: 11-year-old Kingston, 9-year-old Zuma, and 4-year-old Apollo. The fivesome certainly looked like one happy family all dressed up, and as they left the church, Blake even carried Apollo to the car — SO sweet! Recently commenting on his life with Gwen and the boys, Blake admitted that at one point, he thought he had missed his opportunity to be a father figure.

“At this point in my life, I kind of put that—well, I guess that wasn’t meant to be—and then all of a sudden it happens one way or another, and I’m like, wow, I really missed out on a lot, you know,” he shared with Kathie Lee Gifford and Hoda Kotb last month. “Having them around is, I don’t even know how to describe it. It’s so much fun.” Aw!