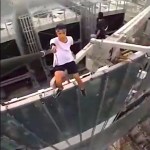 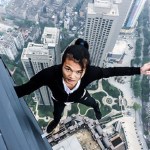 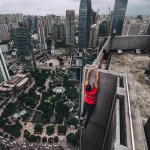 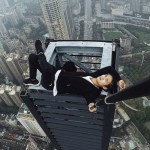 This is truly terrifying. Wu Yongning, a famous Chinese ‘rooftopper,’ filmed himself accidentally falling to death after doing pull-ups at the top of a 62-story skyscraper.

Wu Yongning, 26, known as “China’s first rooftopper” accidentally died on Nov. 8, and the horrific moment it happened was caught on video. He was doing pull-ups at the top of the 62-story Huayuan International Centre in Changsha when he lost his grip and fell to his death. A camera Wu placed on another part of the building was recording the dangerous stunt, and it caught the exact moment he let go on film. He plunged 45 feet and landed on a terrace below, where a window cleaner later found his body. The footage is obviously incredibly unsettling, so watch below at your own risk.

While Wu died in early November, his death wasn’t confirmed to his family until a month later on Dec. 8 after fans voiced concern over his lack of video posts to his social media accounts. Local authorities deemed the death an accident, and already ruled out foul play. The building Wu fell from is actually only open to the public up to the 44th floor before key cards are needed to access the Grand Hyatt hotel, Wu’s girlfriend, who goes by Jin Jin, told Beijing News. Security personnel were also present on the hotel’s top floor, so she believes the daredevil actually took an elevator “over 40 floors” before free-climbing the “nearly 20 floors” left to the top, she said.

His untimely death occurred just days before he was going to ask his girlfriend to marry him. He was due to ask her parents’ permission to marry his girlfriend two days after the fatal stunt, she told Beijing News. He also planned to bring her family a bridal gift of 80,000 Chinese yuan (about $12,000), which was roughly the same amount he was expected to earn from the video, Jin Jin told the newspaper.

Our thoughts are with Wu’s family and friends during this incredibly difficult time.

HollywoodLifers, please leave your thoughts for Wu’s loved ones in the comments below.