Yowza! Not many 68-year-olds can rock a bikini, but Caitlyn Jenner showed she’s got one hot bod for nearly being a septuagenarian. She recently went on a Mexican vacay to celebrate her Oct. 28 birthday and showed off her incredible figure in a black bikini with a pretty black and white see-through polka-dot beach cover up. Cait added a straw hat to help protect her face from the sun. She was seen alongside pal Sophia Hutchins, 21, hanging out on lounge chairs and talking strolls down the beach, deep in conversation. The former reality star flaunted her long, toned legs while walking in the sand near Los Cabos, Mexico.

This trip was literally a dream come true for Caitlyn, who revealed in an Oct. 26 Instagram post that, “40 years ago my therapist asked me what my fantasy is. I told her walking on the beach being my authentic self and…” Next to the caption was a video of her walking down the beach in a low-cut brown one-piece swimsuit aside to the roaring waves of the ocean. She took off her hat, spread her arms in the air and twirled around saying “I’m Freeeeeee.” Aww, how can you not be moved by that moment four decades in the making! See more pics of Caitlyn, here.

Now Caitlyn’s birthday vacation is over, as she headed back to LA to celebrate her daughter Kendall turning 22 on Nov. 3. She made peace with ex-wife Kris Jenner, 61, in an awkward reunion for the big occasion. The family rented out new West Hollywood hotspot Petite Taqueria on the model’s birthday eve for a dinner with over 50 guests. On hand were Kim Kardashian, 37, Kanye West, 40, Kourtney Kardashian, her boyfriend Younes Bendjima, 24, and Kenny’s rumored boyfriend Blake Griffin, 28. Conspicuously absent was the model’s little sister Kylie Jenner, 20, who is reportedly about five months pregnant and skipped the entire party. Bummer. 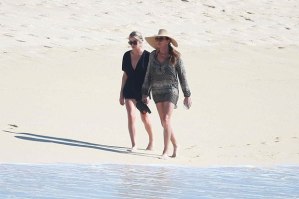 HollywoodLifers, what do you think of Caitlyn’s bikini body?