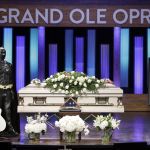 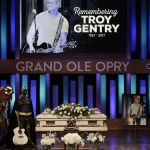 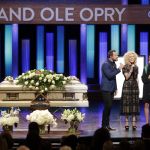 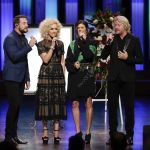 Troy Gentry was laid to rest on Sept. 14, and along with the private funeral for family, there was also a public memorial service held in Nashville. See which country stars, including Trace Adkins celebrated Troy’s life.

The country music community has been rocked by the tragic death of Troy Gentry, and on Sept. 14, singers and fans alike had the chance to pay their respects at the 50-year-old’s memorial service. The public celebration of Troy’s life was held at the Grand Ole Opry House in Nashville, and thousands of people stopped by to celebrate the Montgomery Gentry singer’s life. It’s clear that Troy was incredibly loved. His colleagues and friends made the trip to Nashville to honor him with their music, and the entire memorial was breathtaking.

The ceremony began with his loved ones watching home movies and photos of Troy, before Little Big Town beautifully sang the national anthem next to his casket onstage at the Opry. The casket was surrounded by Troy’s own guitar, a Batman suit (he loved Batman), flowers, and a beautiful portrait of Troy in concert. Vince Gill, Trace Adkins, and even more country heavyweights took to the stage to honor Troy through their own music, and even his. His bandmate Eddie Montgomery, and singer Travis Tritt, were also in attendance, and seen comforting each other at the emotional event.

Troy was tragically killed on Sept. 8 when the helicopter he was riding in crashed at the Flying W Airport in Medford, New Jersey. The singer was traveling to a concert in Jersey when his aircraft suffered from a faulty engine, and the pilot decided to hover above the airport and wait for emergency vehicles to arrive before attempting to land. Unfortunately, the engine died down too quickly, and the copter crashed to the ground from nearly 1,000 feet in the air before officials could arrive. Troy and the pilot both died in the accident.

The “Something To Be Proud Of” singer is survived by his gorgeous wife, Angie, and daughters, Taylor and Kaylee. In lieu of flowers, the family has asked that donations be made to the T.J Martell Foundation, for cancer research, or the American Red Cross, for hurricane relief.

HollywoodLifers, leave your thoughts for Troy’s family and loved ones in the comments section below.