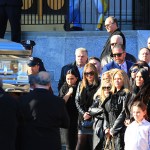 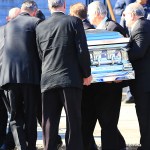 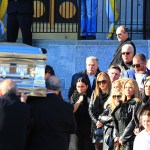 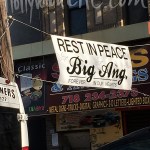 Big Ang was laid to rest on Feb. 22, and the beautiful memorial service clearly showed just how important she was to her friends, her family, and the community in Brooklyn, New York. Click through to see all of the heartbreaking photos, here.

The family and friends of Mob Wives star Big Ang said their final goodbyes at her funeral on Feb. 22, after she tragically passed away from cancer on Feb. 18. It was a beautiful service full of heartfelt moments with friends and fans alike mourning the loss of the big personality. See all of the photos of the service, here.

Big Ang’s friends, family and fans paid tribute to her big personality one last time on Feb. 22, by adding special personal touches to her beautiful memorial service. Ang’s body arrived at the Basillica of Regina Pacis in Brooklyn, New York in an open-backed Cadillac hearse absolutely covered in colorful, bright flowers to match her vibrant attitude.

Above the roadway hung a banner that read “rest in peace Big Ang. Forever in our hearts.” Outside of the church was a giant sign made of flowers featuring her name and a flower portrait of her beloved doggy Lil Louie. Not to mention a pair of giant red lips adorning the church. It was so her!

The photos also highlight just how much Big Ang’s family and Mob Wives co-stars cared about her. Her son AJ Donofrio and estranged husband Neil Murphy were clearly heartbroken by the loss of their matriarch. The pair couldn’t hold back their tears as they followed Ang’s glamorous silver casket out of the church.

Even more touching? Ang’s co-stars actually served as pallbearers, with Carla Facciolo, Renee Graziano and Drita D’avanzo carrying the casket away. The photos show that the girls spared no effort at the funeral, looking gorgeous as always with over-the-top huge fur coats to keep warm on the chilly New York morning.

HollywoodLifers – what did you think of the photos of Big Ang’s funeral? Share your favorite touching moment with us.