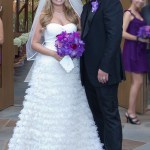 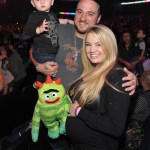 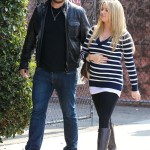 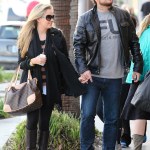 Chris Carney’s shocking death on Dec. 4 may have been avoided, if he was only reportedly sober enough to see that was putting himself in danger. Hours before he got into the car that would ultimately kill him, witnesses say Chris was drinking so much whiskey that he could barely stand up!

The sudden death of Chris Carney may be more heartbreaking than first thought. The 35-year-old lead singer of Prom Kings, husband of Tiffany Thornton, 29, and father of two was reportedly completely drunk when he and his equally wasted friend, Ezekiel Blayton, took off in their SUV.

Chris was reportedly partying hard at The Tavern in Little Rock, Arkansas, prior to his accident, as eyewitnesses tell TMZ that Chris was allegedly “so wasted” by the end. After he reportedly started with beer, Chris allegedly moved to “the hard stuff,” putting back shots of Fireball Whiskey before doing “Vegas Bombs” — which is a drink usually made up of whiskey, rum, schnapps and Red Bull.

After Chris was allegedly “to the point where he couldn’t stand up,” he sat down in the passenger seat of the SUV while Ezekiel drove. If he was as drunk as these witnesses claim, he likely didn’t notice that Ezekiel was just as bombed. Chris’s friend was also allegedly drinking beer and shots before getting behind the wheel. Learn more about Chris by clicking here.

The results were tragic. The former star of twentyfourseven was pronounced dead at the scene on Dec. 4, after their SUV flew off the road while going around a bend, slamming directly into the tree. Neither was reportedly wearing seat belts, according to TMZ. Chris’s friends were heartbroken by his death, as Wilmer Valderrama memorized his best friend, saying “It truly hurts for so many reasons.” Demi Lovato said she was “in shock” over the news of Chris’s death, sharing a picture of her attending Chris and Tiffany’s wedding.

Of course, no one was more heartbroken than Chris’s wife. When Tiffany finally broke her silence, she shared a touching photo of Chris holding their two sons, Kenneth James and Bentley Cash. “My life. My Love. My angel,” she wrote. She posted a touching tribute to her late husband, saying “no one is perfect in this world and we all have our battles,” before saying Chris was “THE BEST father my children could ever have.”

Our thoughts are with Tiffany and Chris’s family and friends during this heartbreaking time.