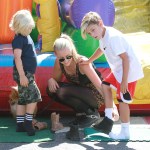 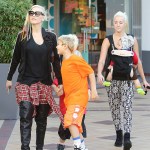 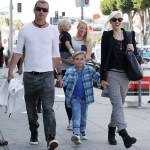 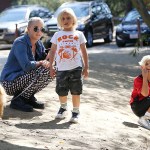 As if allegedly having an affair with her husband wasn’t bad enough, Mindy Mann apparently has coopted Gwen Stefani’s look since the day she was hired as their nanny! Did Mindy really try to take Gwen’s man AND her style?

One of the strangest indictions that Gwen Stefani‘s nanny, Mindy Mann, was allegedly having an affair with her husband, Gavin Rossdale, is the fact that she was totally biting her style, too. Gwen has apparently been living out her own Single White Female nightmare, with her nanny as the co-star!

Shortly after being hired by Gwen and Gavin in 2008 to look after their sons, Mindy reportedly began altering her appearance and behavior to be more like Gwen. “If Gwen would eat something or do a workout or get a new handbag, Mindy would do the same thing,” according to a source who spoke to US Weekly. “Gwen thought it was weird.” Did Mindy believe that copying glamorous Gwen would make her more appealing to Gavin?

Mindy started detailing her new looks through selfies, according to US, that appeared way too similar to Gwen’s iconic style. A 2013 pic showed Mindy wearing her hair wrapped in a black bandana, shortly after Gwen did so herself at a red carpet event. She traded her clothes for more edgier duds, and kept her hair the same platinum blonde as Gwen. A little worrisome, no?

Aside from allegedly Single White Female-ing Gwen, there were a few other disturbing signs that something may have been going wrong in the Stefani-Rossdale household. And they all included Mindy! Over the years, Mindy and Gavin have reportedly crossed the line a little too much, getting a bit handsy behind Gwen’s back. Gavin allegedly left Gwen after the birth of their son Apollo to sleep with Mindy!

Some might recall the eyebrow-raising photos released in November 2012, of Gavin and Mindy hiking with sons Kingston and Zuma. You know, the ones where Gavin’s hand is clearly on the small of her back? Gavin apparently swore up and down that when the photo was taken, Mindy had stumbled and he was steadying her.

But that may not be the case, now, especially since Gwen reportedly found illicit texts between the two on her kids’ iPad. Damn you, Cloud! Though the signs have been right in front of her for years now, “that was the first time Gwen caught him red-handed,” the source said. Poor Gwen!

HollywoodLifers, do you think Gavin cheated on Gwen with their nanny? Tell us in the comments!