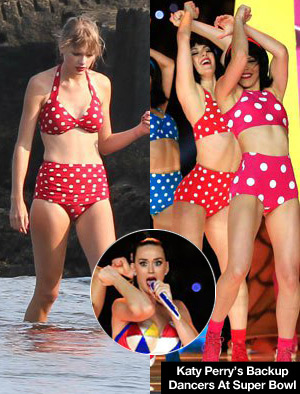 HollywoodLife.com told you first in Jan. 2015 that Katy had planned to diss Taylor at the Super Bowl!

Katy seemed to deliberately put the high-waisted polka dot bikinis on backup dancers. Backup dancers were reportedly the cause of Katy and Taylor’s feud in the first place. Ouch.

I might be reading to much into this #HalftimeShowKatyPerry pic.twitter.com/0K38kM4BYZ

The understated dig is also pretty much a direct reference to Taylor’s Cape Cod summer with Conor Kennedy in 2012. The “Blank Space” singer was frequently spotted out with the dashing gentleman and we’d never forget that red, high-waisted polka dot bikini she wore that summer.

Taylor and Conor broke up in Oct. 2012. Could Katy have been taking aim at T-Swift’s love life, too?

Katy has been pretty vocal about what she’d do if someone tried going after her reputation. “If somebody is trying to defame my character, you’re going to hear about it,” she told Billboard after being asked about her beef with Taylor.

Katy’s Super Bowl halftime performance was wild in the best way possible. She rode in on a gigantic robotic lion while singing “Roar.” Yes, really.

She hit up guest performer, Lenny Kravitz to her first hit single, “I Kissed A Girl.” Then, Katy teamed up with Missy Elliott. The beloved rapper performed “Get Ur Freak On,” “Lose Control” and “Work It” for the show. Such a throwback!

HollywoodLifers, what did you think of Katy’s subtle diss? Did you even notice it? Let us know!