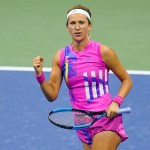 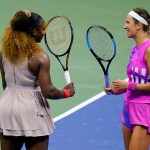 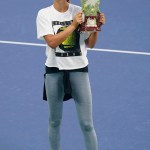 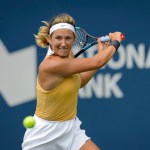 Victoria Azarenka is on her way to her first Grand Slam final since the US Open in 2013! Here are five things to know about the tennis champion who defeated Serena Williams in the US Open semi-final.

Victoria Azarenka is on a major winning streak. The Grand Slam tennis champion, 31, who hails from Belarus, defeated Serena Williams, 38, in a high-quality three-set battle in Arthur Ashe Stadium at the US Open semi-final. Although Victoria, known also as Vika, had a slow start in the first set — losing to Serena 1-6 — she found her game, energy and resilience, taking out the 23-time Grand Slam champion in the latter two sets at 6-3, 6-3. Awaiting Victoria in the final, this Saturday, is world no. 9 and fellow two-time Grand Slam champion Naomi Osaka. Before the match, learn more about Victoria Azarenka with these five facts!

1) She’s a two-time Grand Slam Champion. Victoria’s best showing at Grand Slams came in back-to-back wins at the Australian Open in 2012 and 2013. There, Victoria defeated Maria Sharapova in 2012 and Li Na in 2013, earning her sole Grand Slam titles. Following her first showing at the tournament, Victoria’s rank moved all the way up to no. 1, making her the top women’s player in the world at the time.

2) Victoria has played Serena before. Prior to their September 10 meeting in Arther Ashe Stadium, Victoria and Serena had a long history of playing each other. Serena currently holds the record for most wins against the Belarusian — 18-5 — but Victoria was ready to answer Serena’s power and make up for past matches during the recent US Open semi-final. In fact, Serena and Victoria met in the finals of the US Open in 2012 and 2013, with both championships going to Serena in incredibly close matches.

3) She’s on a major comeback streak. Prior to defeating Serena in the US Open semi-final, Victoria had a straight-set win over Belgian player and world no. 18 Elise Mertens, winning their quarter-final meeting 6-1, 6-0. Prior to that match, she had a three-set win over world no. 26 player, Karolína Muchová. In the lead-up to meeting Muchová, Victoria hadn’t dropped a set against her competitors. She also won the Western & Southern Open before the start of the US Open, edging out Naomi Osaka when the Japanese player chose not to play due to a hamstring injury.

4) There was a time when fans weren’t sure Victoria would return to the sport. Victoria’s comeback streak is predicated on the fact that, for roughly two-three years, fans and commentators of the sport weren’t sure she would continue to play. The tennis champion took time away from the sport, dealing with a custody battle with her former partner over their son, Leo, born in December 2016. During that time, Victoria was unable to play as much as she wanted, dropping out of the 2017 season save for the Wimbledon Championships. And when she did return to the court, her draw was nearly always a top seeded player. But now, Victoria is playing the best she has in nearly seven years.

5) She’s a devoted mom. One of the biggest narrative highlights from the US Open 2020 semi-final was that Serena and Victoria were both mothers meeting in a Grand Slam match at such a late stage in the tournament. Victoria welcomed her little boy in December 2016 and regularly posts about him on Instagram. She even setup an Instagram account for her son, Leo, whom she shares with Billy McKeague.

Following her second round victory at the US Open, Victoria aptly shared with the press, “But identifying myself or other players just as mothers, I think that’s not the only thing that we are. I think we are part of, you know, being a mother, we are also tennis players. We are also women who have dreams and goals and passions,” she observed. “My life just began when I became a mother. I’ll say that really openly.”

Watch Victoria Azarenka take on Naomi Osaka at the US Open women’s final on Saturday, September 12, at 4 pm ET on ESPN.