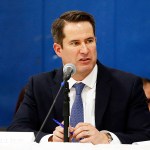 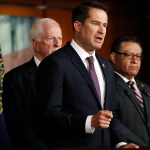 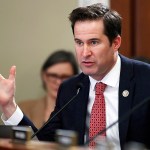 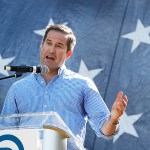 Get ready to memorize yet another name in the 2020 race. Massachusetts Congressman Seth Moulton, 40, announced during an interview with Good Morning America on April 22 that he too is running for president in 2020. Moulton becomes the 19th Democrat to announce their intention to challenge President Donald Trump for the presidency. But does he have what it takes to knock the 18 other candidates out of the race — then beat Trump? Learn more about him:

1. Moulton is running because he “believes in this country.” Moulton announced his run in an interview with George Stephanopoulos on Good Morning America. “I’m running because I’m a patriot, because I believe in this country, and because I’ve never wanted to sit on the sidelines when it comes to serving it. That’s why I joined the Marines,” Moulton, who served four tours in Iraq, said. “It’s why I ran for Congress to try to prevent what I saw got us into Iraq from happening again, and it’s why I’m running to take on the most divisive president in American history, to bring this country back together.”

2. He became a congressman in 2015. After graduating from Harvard in 2001 with a physics degree, Moulton joined the Marine Corps. He served four tours of duty in Iraq after 9/11, later criticizing the war as based on a “lie” about weapons of mass destruction. After returning home, he got his Master’s in business and public policy. He won the election to become the representative of Massachusetts’ 6th district, and was reelected in 2016. He had the support of former VP Joe Biden and MA Senator Elizabeth Warren; Warren is running for president in 2020, and Biden is expected to announce his candidacy.

3. He once compared Trump to Hitler. During a 2016 interview with The Boston Globe, Moulton compared Trump’s rise to power in the 2016 presidential race to that of Adolf Hitler’s in the 1930s. According to Moulton, in order to understand who a society “can elect a demagogue,” voters should study how the German people elected Hitler.

Rep. @sethmoulton tells @GStephanopoulos he is running for president "because I'm a patriot, because I believe in this country." See the interview coming up this morning on @GMA. https://t.co/WZ4Hv0pAM7 pic.twitter.com/uQNaC2XJRJ

4. He’s a critic of his own party. Moulton has argued that Democrats need a new generation of leaders. Along with fellow 2020 candidate Tim Ryan of Ohio, was part of a coalition in the House of Representatives that opposed Nancy Pelosi becoming Speaker of the House when Democrats took back power in the 2018 midterms.