UPDATE (4/17/20, 9:00 p.m. ET): Thanks to her legendary stats and triple-doubles, Sabrina Ionescu topped the lists of draft picks leading up the the WNBA Draft on April 17 — predictions that proved to be true. New York Liberty had the No. 1 pick in the draft, and the team’s No. 1 choice was Sabrina! “I’m blessed to be in this position that I have worked for my whole life,” Sabrina said on the day of the virtual draft, per ESPN. It’s unclear when Sabrina will begin her journey with the WNBA season, due to the coronavirus pandemic (it also cut Sabrina’s last ever college season short).

Here’s what you should know about Sabrina’s legendary college career, which carried her to draft day. She has been such a prominent figure in women’s sports, she even spoke at Kobe Bryant’s memorial service on Feb. 24 (more on that below).

ORIGINAL: Sabrina Ionescu is truly remarkable. The 22-year-old University of Oregon Ducks point guard made NCAA history on the same day she credited Kobe Bryant for giving her the “blueprint” to be an extraordinary basketball player — one whose impact is much bigger than the game itself. Sabrina became the first player in  Division I history (male or female) to earn 2000 points, 1000 assists and 1000 rebounds in Oregon’s win over Stanford on Monday night, a night she’d hoped would be historic because of her late friends Kobe and Gianna. Learn more about Sabrina with these five fast facts!

1. Sabrina Ionesco is an America basketball player. — She is the current point guard for the Oregon Ducks of the Pac-12 Conference. Sabrina, born on December 6, 1997 in Walnut Creek, California, is the NCAA’s all-time leader in career triple-doubles and the Pac-12 Conference all-time leader in assists. Instead of forgoing her senior year to declare for the WNBA Draft, Sabrina decided to stay at Oregon to finish out her four years.

2. She made NCAA history just hours after speaking a Kobe and Gianna Bryant’s public memorial. — Sabrina became the first player in Division 1 history with 2000 points, 1000 assists and 1000 rebounds on Monday, February 24. She notched her 26th career triple-double in Oregon’s win over Stanford, 74-66. The W led No. 3 Oregon past fourth-ranked Stanford. In the post-game, Sabrina said her major milestone was all for Kobe.

“That one was for him. To do it on 2-24-20 is huge. — We had talked about it in the pre-season,” she recalled. “I can’t really put that into words. He’s looking down and really proud of me and [I’m] just really happy for this moment with my team.”

3. She was very close with Kobe and Gianna Bryant. — Sabrina worked with Kobe one-on-one on her game, as well as mentality and character building both on and off the court. She’s even said that she considered Kobe a mentor. Gigi was often present for their meetings and she looked up to Sabrina, who later noted that she and Gigi were different because of what Kobe had passed on to them. Sabrina spoke about her close relationship with Kobe at his and Gigi’s “Celebration of Life” memorial on February 24.

“I still text him even though he’s not here,” she said before she thanked him for everything he’s done for her and women’s basketball. “His voice is still in my head although his body is not on earth,” she later added. Sabrina later wrote in a tribute on Instagram, “I only have one choice. To live out your legacy.” 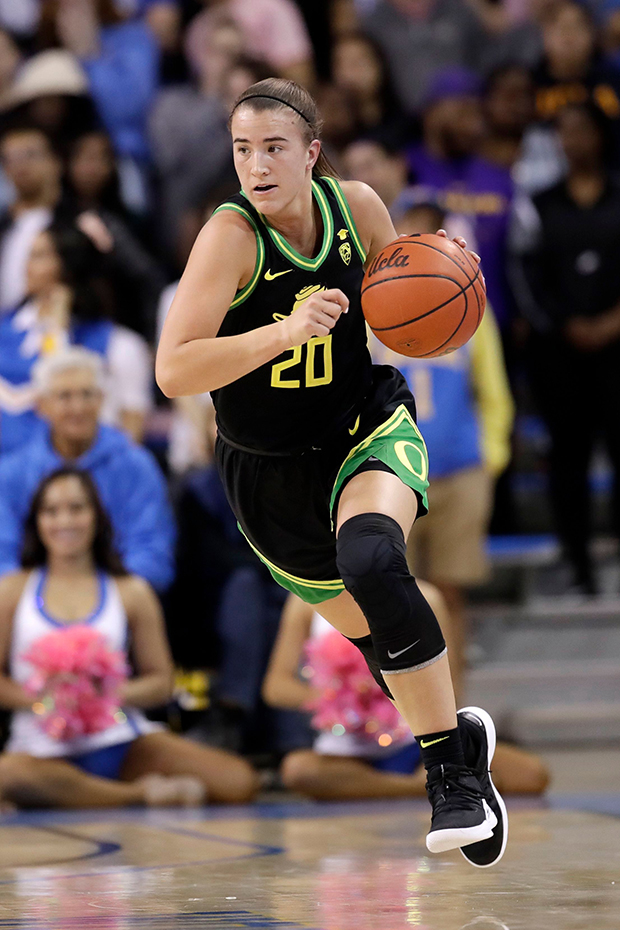 4. Sabrina is friends with Steph Curry. — The 3-time NBA champion has sat courtside at many games with his daughters in support of Sabrina. The Golden State Warriors guard was present for Sabrina’s history-making game following Kobe’s memorial.

5. She is an advocate for women in sports. — “Comment section doesn’t phase me. They’re talking about cooking?! Well I’ve been serving triple doubles lately,” Sabrina captioned a photo of her during a game against Indiana.