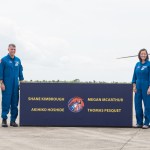 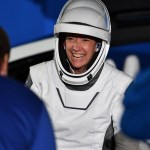 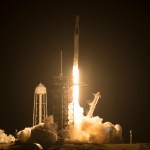 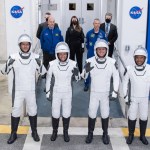 Megan McArthur is one of four crew members of the SpaceX Crew Dragon spacecraft that launched on Friday, April 23, for a six-month stay in space! Learn more about the astronaut.

In the early morning hours of April 23, NASA‘s Kennedy Space Center was aglow, as the SpaceX Crew Dragon spacecraft lifted off into outer space for a six-month stay. Aboard the rocket was NASA astronaut Megan McArthur, who was also joined by fellow NASA team member Shane Kimbrough, French astronaut Thomas Pesquet of the European Space Agency, and Akihiko Hoshide from Japan. The crew will stay six months at the International Space Station, once their Crew Dragon capsule docks there early Saturday morning, per CNN. Learn more about Astronaut McArthur!

Megan McArthur Is An Astronaut With NASA

McArthur, born Katherine Megan McArthur, was chosen as an astronaut in the class of 2000, per NASA‘s official site. She earned her Bachelor of Science in Aerospace Engineering from the University of California, Los Angeles as well as her Ph.D. in Oceanography from the University of California, San Diego. While working toward her Ph.D., McArthur conducted research at the Scripps Institution of Oceanography.

Liftoff of Falcon 9 and Dragon! pic.twitter.com/g6Oi8qwU2Y

Megan McArthur Has Served On A Previous Mission

In 2009, McArthur served as the Mission Specialist on the STS-125, the final space shuttle mission to the Hubble Space Telescope, per NASA. Because of McArthur’s work with her team on this mission, the Hubble Space Telescope is still in operation! Overall, McArthur has logged roughly 13 days in space, and she’ll definitely be adding to it with her latest mission to the International Space Station!

Megan McArthur Is A Self-Professed Bookworm

It’s very rare that McArthur goes anywhere at all without a book, as she revealed in a Twitter video she shared to her account on April 22, just before her recent mission. “I love books,” she said in the video. “No matter where I go, I just about always have a book with me,” she shared with her more than 27K followers. McArthur definitely intends to continue reading while aboard the ISS, and promised her Twitter followers that, “the next time I read a book for you guys, I will be floating on the [International Space Station].” Watch her video here!

Megan McArthur Created Her Own Playlist For ‘Launch Day’

Although she doesn’t post excessively on social media, she did share her “Launch Day Playlist” to her Instagram account on April 22, and McArthur has some out-of-this-world taste in music! Among the tunes that she compiled to get into the right frame of mind for her April 23 launch, some included “Waiting” by Green Day, “Something Just Like This” by The Chainsmokers and Coldplay, and “Learn To Fly” by The Foo Fighters! “If you want to rock out with me tomorrow while we’re driving out to our launch pad, here’s what I’ll be playing,” McArthur captioned her Instagram post.

Megan McArthur Is Married To A Fellow Astronaut

McArthur is married to Bob Behnken. The couple wed in McArthur’s home state of Hawaii and have one son together named Theo. Bob was a part of the historic SpaceX Falcon 9 launch in May 2020!