Ben Simmons is apparently headed down the aisle! The NBA star and former flame of Kendall Jenner reportedly popped the question to Maya Jama, so find out all about his lady love.

Ben Simmons, 25, popped the question to Maya Jama, a UK TV host, during the holidays, according to multiple reports (h/t New York Post.) The Philadelphia 76ers player, who was once romantically linked to Kendall Jenner, supposedly proposed to Maya, 27, on Christmas, according to The Sun. Maya and Ben started dating in May 2021 and were spotted together at Wimbledon in July. They’ve reportedly worked to keep this engagement a secret, telling only friends and family.

However, the cat was seemingly let out of the bag right before the end of the year when Ben visited tattoo artist Philly Joe. “Honored and humbled to have gotten this opportunity to tattoo my boy [Ben Simmons] and his fiance and her friend the UK LONDON,” a now-deleted Instagram post from Philly Joe said, according to Awesomo. The tattoo artist ended the now-deleted post with “AWESOME FOLKS GOOD TIME AND A GREAT DINNER THANKS TO YOUR CHEF.” HollywoodLife has reached out to Ben’s rep for comment on these reports and will update the post with any new information. In the meantime, here’s the scoop on Ben’s alleged fiancé. 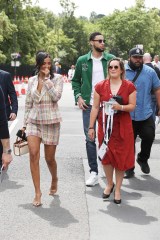 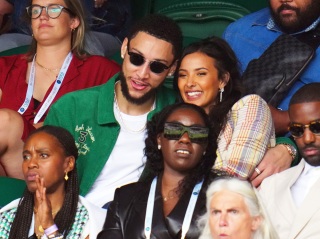 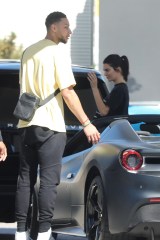 Born on Aug. 14, 1994, Maya Jama is a DJ, radio presenter, and British television host. Born and raised in Bristol, Maya moved to London to attend college and break into TV and radio. She began making videos for YouTube, which led to a presenting slot on an online football (soccer) channel, per The Guardian. In 2018, she joined BBC Radio 1, and stayed with the channel until 2020. She opted not to renew her contract because she was “juggling other commitments” and wasn’t able to “give 100% to the show,” she told The Guardian.

She has worked with the Brit Awards, hosting their 2017 Pre-Brit Awards Party. In 2018, she presented The Circle and co-presented Stand Up to Cancer. In 2020, she presented the BBC One TV show, Peter Crouch: Save Our Summer. In early 2021, she became the new presenter of Glow Up: Britain’s Next Make-Up Star. Later that year, she joined Simon Cowell’s new music competition, Walk The Line, as the show’s host.

2. Stormzy Once Dated Her.

From 2015 to 2019, Maya was romantically entwined with grime rapper Stormzy. The split inspired his song, “Lessons,” per The Evening Standard. During the breakup, Maya was commonly referred to as merely “Stormy’s girlfriend,” which annoyed her to some extent. “He was – he is – massive in the public eye, and a lot of people didn’t know who I was,” she told The Guardian. “But now I do feel people know my name separately, and it does feel like I’m coming into my own. It feels like I’m finally getting recognition for my hard work.”

3. She Grew Up With A Father Behind Bars.

Maya’s father was in and out of prison for most of her childhood. “My dad’s side of my family was super-supportive, and they did everything in their power to make me and my brother not feel like we were missing out on anything. And I did visit my dad in jail up until I was about 10,” she told The Guardian. In 2017, she made a documentary about growing up with a father in prison and how that affected her and other people.

4. She’s Ready To See The Rest Of The World.

“The way things have gone one and how long it [the pandemic] has been going – it has got to a stage now I just am yearning for life experience, which is not possible right now,” she told The Evening Standard in March 2021. “I have been working since I was 16… pretty much most days. And not really having longer than a week or two off ever. I would love to travel and explore and be able to find my adult self.”

In December 2020, Maya launched her own face and eye masks line – MIJ Masks. She has also worked with brands and was recently an ambassador for haircare brand Aussie. “It is a match made in heaven. They have been donating to the [World Wildlife Foundation] to help with everything that is going on right now which is needed,” she told the Evening Standard. “It is nice to be with a brand that actually cares and that is giving back.”