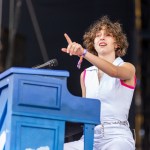 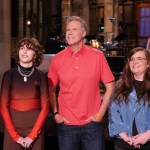 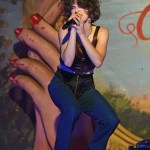 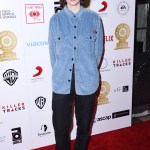 All hail the new king of pop — King Princess! The ‘1950’ singer is about to perform for the first time on ‘Saturday Night Live,’ so get to know all about this rising star.

Fresh on the heels of her TV debut on Late Show With Stephen Colbert, King Princess will head to 30 Rockafeller Plaza and perform on the Nov. 23 episode of Saturday Night Live. The 20-year-old singer, who first blew up with her 2018 ep Make My Bed, just released her debut album. Cheap Queen, to predominantly positive reviews. King Princess (born Mikaela Straus) has been dubbed “a burgeoning queer idol” by Pitchfork and is poised to be a massive star in the coming decade. Before her SNL performance, here’s what you need to know.

1. She’s signed to Mark Ronson’s record label. Her debut single, 2018’s “1950” was her first release on Mark’s Zelig Recordings label. Zelig is a joint venture with Columbia—where Harry Styles is signed. Keep that in mind, because the former One Direction star had a major influence on the start of her career.

2. She’s built herself a dedicated following from the LGBTQ community. Her breakthrough, anthem “1950,” is a queer love anthem for the ages. The song garnered loads of support from the LGBTQ community, who loved the song’s honest lyrics. “I hate it when dudes try to chase me, but I love it when you try to save me, ’cause I’m just a lady, I love it when we play 1950,” she croons.

“I’ve always been kind of a genderqueer person,” she told them in 2018. “It’s something I kind of came into later ‘cause I didn’t really think about it as an identity as much as the way it had to do with the people I loved and the way I dressed…I like that I can ride that line on the periphery of femininity. I don’t always have to be an active participant. I think that’s really freeing.”

3. Harry Style boosted her career — but she reportedly turned down a chance to open for him. “I love it when we play 1950,” Harry Styles tweeted in March 2018, reciting a lyric from King Princess’s debut single. Harry’s followers quickly flocked to King Princess after his ringing endorsement. “I swear, there was nothing planned about that,” she told them. “It was wild. I woke up, and I was like, oh shit. This some sh-t.”

He would have been more instrumental in elevating KP’s early career, had she not expressed some wisdom beyond her years. In 2018, a clip surfaced of King Princess claiming that Harry asked her to open for him at Madison Square Garden in New York City. While incredibly flattered, King Princess claimes she politely declined because “that’s a massive f*cking venue. I’m not ready.” Somehow, she knew that it was a case of “too much, too soon,” and she opted out. But, she did thank him for offering her the slot, and “for loving the gays.”

It all worked in the end. King Princess will open up for Harry during his 2020 tour.

3. Harry wasn’t the first person she turned down. The musician declined her first record deal to focus on school when she was 11-years-old. “I took some meetings when I was 11,” she told NME. “I think what was interesting about being a young kid in environments like that was people were like, ‘You’re so sure of yourself! You’re so confident!’ And I was like, ‘I’m 12.’ Now I’ve got to this place where I’m like, ‘This is who I am.’ I’m so grateful for those experiences where I got to sit there and be like, ‘What the fuck is this shit?’ Cos I stopped feeling like that after a while. I stopped feeling lost in meetings, or I stopped feeling like people were telling me where to go and listening to invalid opinions.”

4. She grew up surrounded by music. King Princess’ dad, Oliver Straus, is a recording engineer, and the owner of Brooklyn’s Mission Sound. Oliver, according to Discogs, has worked on albums by Cat Power, Monster Magnet, The Residents, Taking Back Sunday, P!nk, The National, and more.

5. She’s bringing silly back.  When NME asked why King Princess says “gak” a lot, she went on to explain it like this: The gakkety gakkety gak! It’s what the people say at the clubs – the gakkety gak. The zhuzh…  It’s silly. The gays – we are silly. Being silly is really underrated right now because everything’s so fucking serious. And it’s true – it is serious. All the shit I watched growing up – SNL, 30 Rock, Parks And Rec, RuPaul – they’re all silly, and I feel that what made them so powerful is that they attained this level of seriousness and activism without being too cringy serious.”