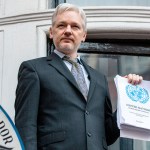 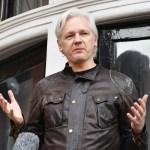 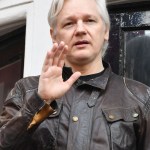 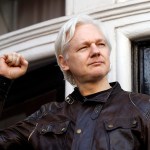 After living in the U.K.’s Ecuadorian embassy for seven years, Julian Assange was arrested on April 11 by the Metropolitan Police Service.

UPDATE 5/1/19 AT 7:20 A.M. ET: Julian Assange was sentenced to 50 weeks in jail by a British judge on May 1, less than one month after his arrest for skipping out on bail in 2012. The judge, Deborah Taylor, rejected Assange’s plea for leniency, and gave him just two weeks less than the maximum sentence of one year. The sentencing came after Assange’s lawyers claimed he only jumped bail because he was a “desperate man.”

Julian Assange, 47, was arrested at the Ecuadorian embassy in London on April 11, 2019 for breaching U.K. bail conditions after failing to surrender to a court warrant issued by the Westminster Magistrates’ Court in June 2012, police confirmed. Upon arrival at the police station, Assange was further arrested by U.S. authorities on an extradition warrant. Assange had been taking refuge in the Ecuadorian embassy since 2012 because he was facing sexual assault charges in Sweden and feared being extradited. However, the Ecuadorian government withdrew Assange’s asylum due to his “discourteous and aggressive behavior.” Ecuador’s president, Lenin Moreno, explained, “The hostile and threatening declarations of his allied organization against Ecuador, and especially the transgression of international treaties, have led the situation to a point where the asylum of Mr. Assange is unsustainable and no longer viable.” He also claimed that Assange “repeatedly” broke the embassy’s rules by installing his own electronic equipment and blocking security cameras. Here’s more to know about Julian Assange:

1. He is a co-founder of WikiLeaks. Assange worked as a computer programmer and dabbled in hacking before helping establish WikiLeaks in 2006. The organization publishes secret information that is received from anonymous sources, and has released more than 10 million documents since its creation. WikiLeaks became highly publicized in 2010 after publishing classified information from Chelsea Manning, a United States soldier who disclosed hundreds of thousands of military and diplomatic documents to the organization. After this release, authorities in the U.S. began investigating Assange for possible violation of the Espionage Act.

2. He was accused of sexual assault. After Assange visited Sweden in Aug. 2010, two women came forward with allegations of sexual assault against him. The case was closed after he was questioned, but a special prosecutor re-opened it in November of that same year with various charges against Assange. At this time, Assange had returned to Britain, and the prosecutor claimed that the law prevented her from questioning him there. Assange was eventually questioned on the rape allegations in 2016, although the statute of limitations on many of the charges against him had already expired. The case was dropped in May 2017.

3. He’s won several awards. Although Assange’s WikiLeaks work is controversial, he has been praised and awarded for his WikiLeaks contributions. He received the TIME Person of the Year Reader’s Choice award in 2010, and was also given the Sam Adams Award that year. In 2011, he received the Voltaire Award for Free Speech, Sydney Peace Foundation Gold Medal and Martha Gellhom Prize for Journalism, amongst other honors. He has also received the Yoko Ono Lennon Courage Award for the Arts, as well as many other awards, and was nominated for a Nobel Peace Prize in 2019.

4. He has several children. Assange married a woman named Teresa when he was a teenager, and she gave birth to their son, Daniel Assange, in 1989. Information about the rest of his kids is mostly unknown, although it’s been rumored that he has several other children. Assange once wrote an open letter to France’s president, in which he claimed that his children were forced to change their identities and reduce their contact with him because they were being threatened due to their father’s controversial work.

5. He’s been romantically linked to Pamela Anderson. Throughout 2016 and 2017, Pamela Anderson was spotted visiting Assange at the Ecuadorian embassy several times, which sparked rumors that the two were romantically involved. The dating rumors were never confirmed, but Pamela explained, “I’m always doing something, trying to do something every day, befriending people that are important in the world like Julian Assange. I think he’s a very important person and I think that history will look back on him and realize how important he is. I think WikiLeaks is very heroic and important and it’s true news.”