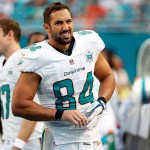 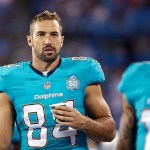 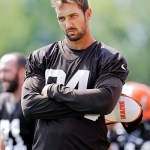 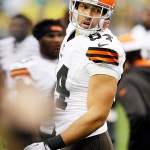 Tiger Woods’ ex Elin Nordegren is said to be dating former NFL star Jordan Cameron & is also reportedly pregnant with his child. Here’s everything to know about the dad to be!

Talk about a surprise! On June 13 reports surfaced claiming that former NFL star Jordan Cameron, 30, is not only dating Tiger Woods’ ex-wife, Elin Nordegren, 39, but they’re expecting a child together. The out-of-the-blue news caught everyone off guard, especially after Elin showed up at her son Charlie‘s June 7 flag football game rocking a very sizable baby bump. As the mom of two prepares for a third child, (she shares 11-year-old daughter Sam and 10-year-old-son Charlie with her ex) everyone is eager to know more about her new man. Here’s what you should know about Jordan Cameron!

1. He’s a former Miami Dolphins star. The athlete was initially drafted by the Cleveland Browns in the fourth round of the 2011 NFL Draft, and eventually joined the Miami Dolphins in 2015. After suffering a number of concussions, Cameron decided to retire at just 28-years-old.

2. He was almost a basketball star. After high school, Cameron decided to play basketball at Brigham Young University rather than football. However, he ultimately transferred to USC in 2007 to play football as a wide receiver.

3. He has one son, Tristan Cameron. The boy is 10-years-old and the name of his mother is not public knowledge.

4. He hails from Los Angeles, but now has a posh pad in Palm Beach, Florida. The former NFL’er is said to be living in a $50 million mansion in Palm Beach, according to public records. Reports claim that Elin resides there as well.

5. He enjoys keeping his life private. Reports claim that he has been dating Elin for more than two years, but the couple has kept their romance extremely private, and have not publicly confirmed their relationship.