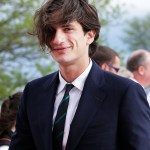 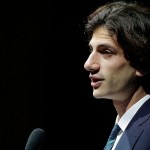 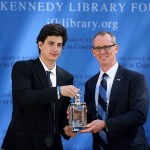 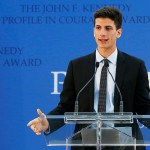 Jack Schlossberg, JFK’s only grandson, is quite the hunk and he’s becoming quite the political activist. Here’s what you should know about Jack and his work in public service.

Jackie Onassis‘s grandchild Jack Schlossberg, who is also late President John F. Kennedy‘s only grandson, was spotted spending some time with his sister, Rose, on the beach at Red Gate Farm in Martha’s Vineyard, a 340-acre property owned by the Kennedys, over the weekend. Want to know more about him? Here’s what else you should know about Jack:

Jack is the spitting image of his late uncle, John F. Kennedy, Jr. It’s to the point that it’s uncanny. JFK Jr. died in 1999, when he was just 38 years old, and Jack was six. Seriously, though, the hair, eyes and jawline make them practically identical. Crazier hair, but total twins otherwise.

2. He lived in Japan during the Obama administration.

Jack’s following in his mother’s footsteps by entering public service after graduating from Yale in 2015 with a degree in Japanese history. Caroline was the US Ambassador to Japan during the Obama administration, and Jack lived overseas in Japan with her. In his speech as host of the JFK Profile In Courage Awards in 2017, Jack spoke about his experience:

“I learned a lot about Japan. But the most important thing I learned was about my own country,” Jack said. “It was something I had been told all my life but never fully grasped. I saw how people around the world see America: a beacon of opportunity, stability and strength in a world of uncertainty. America’s historic role has been just that. America, as President Kennedy once described it ‘has always been a lantern in the dark for those who love freedom but are persecuted, in misery, or in need.’”

John Schlossberg, son of former U.S. Ambassador to Japan Caroline Kennedy and grandson of former Pres. John F. Kennedy: "In this election, our future is on the ballot. For my generation, it will define the rest of our lives." https://t.co/g2aifw44ZR #DemConvention pic.twitter.com/NP1Ep0TiCY

Another similarity between Jack and his uncle: political writing. John Jr. was the publisher of George, a now-defunct political magazine out of Washington, DC. Jack writes about politics, with bylines in the Washington Post, Time, and Politico. His sister Tatiana Schlossberg, 27, is a reporter for The New York Times.

4. He started a non-profit in 8th grade.

Jack co-founded the non-profit RelightNY while he was still in middle school. The organization, founded in 2007, gives energy-efficient light bulbs to low-income families around NYC and promotes environmental awareness.

5. He reportedly has a crush on Kendall Jenner.

During Kim Kardashian‘s May 2019 Vogue cover story interview, author Jonathan Van Meter wrote, “At one point, Kim is holding court in a sitting area just outside her bedroom. Someone from the crew mentions that the very handsome young John Bouvier Kennedy Schlossberg, son of Caroline, reportedly has a crush on her half-sister Kendall, and Kim’s eyes twinkle at the prospect of colluding over some dynastic matchmaking.”