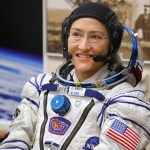 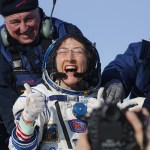 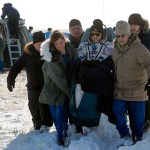 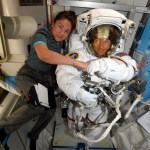 Welcome back to Earth, Christina Koch. After breaking the record for the longest single spaceflight by a woman, she’s returned home, so get the scoop on this amazing astronaut.

Nearly a year after she arrived at the International Space Station, Christina Koch, 41, is back on terra firma. The Jacksonville, North Carolina native returned to Earth early Thursday (Feb. 6) along with European Space Agency astronaut Luca Parmitano and Russian cosmonaut Alexander Skvortsov. The Soyuz spacecraft carrying the trio of space explorers landed near Zhezkazgan, Kazakhstan, at 4:12 a.m. ET, according to CNN. “I’m so overwhelmed and happy right now,” she said to reporters while sitting outside the capsule. She has a reason to be happy – as she made history while orbiting above Earth. For those who don’t know, here’s why Christina Koch has just entered her name in the history books:

1. Christina set the record for the longest single spaceflight by a woman. 328. It’s a number that will be near to Christina’s heart for the rest of her days. That’s the number of consecutive days that she spent in space, the longest ever for a woman. (The longest single spaceflight by any person remains 437 days, set by Russian Valeri Polyakov, who set the record from January 1994 to March 1995.) The previous record-holder was another American, Peggy Whitson, with 288 days. During Christina’s mission, she completed 5,248 orbits of the Earth, and traveled 223 million kilometers/139 million miles, according to the BBC. That’s the equivalent of 291 round trips to the moon from Earth.

“For me, it’s all about the honor I feel to follow in the footsteps of my heroes,” she told reporters days before her return. “For me, it was important to see people that I saw a reflection of myself in, growing up, when I was envisioning what I could do with my life and what my dreams might be. To maybe be that source of inspiration for someone else is just such an honor.”

HERSTORY: Astronaut Christina Koch returns to Earth after spending 328 days aboard the International Space Station, setting a record for the longest single flight by a female https://t.co/nYUpxdR1xY pic.twitter.com/E0exAHSppR

2. She also was part of the first all-female spacewalk. On Oct. 18, 2019, Christina and her fellow astronaut, Jessica Meir, set another record by conducting the first all-female spacewalk. “We caught each other’s eye, and we knew that we were really honored with this opportunity to inspire so many, and just hearing our voices talk to Mission Control, knowing two female voices had never been on the loops, solving those problems together outside — it was a really special feeling,” Christina said of that first spacewalk, per CNN. During her mission, she completed a total of six spacewalks.

3. Her mission helped NASA get ready to go to Mars. While in space, Christina devoted much of her time to conduct various science experiments and investigations. But, just being in space was an experiment. The lack of gravity causes bone and muscle loss in astronauts, and Christina was part of the Vertebral Strength investigation, which focused on helping develop countermeasures to the impact of spaceflight.

“Koch’s extended mission will provide researchers the opportunity to observe effects of long-duration spaceflight on a woman as the agency plans to return to the Moon under the Artemis program and prepare for human exploration of Mars,” NASA said in a statement, per CNN. She was also part of the Kidney Cells investigation (studying the development of kidney stones and osteoporosis in space) and the Microgravity Crystals investigations (which could lead to better cancer treatments.)

While she’s basking in the glory of her record-setting flight, she hopes that someone else will break it soon because it means “we’re continuing to push those boundaries.”

5. She’s ready for some Mexican food. After a year in space, Christina is ready for some R&R. She’s eager to dig into a bag of chips with some salsa, the food she’s missed most. Crunchy and crumbly foods like chips aren’t allowed on the space station because the remnants could clog the equipment. She’s also ready to spend some time with her husband, Bob, at their home near the Gulf of Mexico in Galveston< Texas. She is also looking forward to surfing and swimming, something she hasn’t done in almost a year.