When it comes to wearing feathers, your favorite stars are doing it right! Kylie Jenner, 22, just rocked feathers when she stepped out for dinner at Nobu Malibu on August 19, after a fun-filled, luxurious Italian vacation. Kylie looked fabulous when she opted to wear a black Prada Sleeveless Feather Trimmed Top which was cropped and had a sheer hem, completely covered in fluffy feathers. She paired the top with a pair of skintight, light-wash high-waisted mom jeans with two gaping holes at the knees. Topping off her fun outfit was a pair of black Christian Louboutin x Roland Mouret Cage & Curry Mesh & Woven Leather Pumps and a Hermes Black Kelly 28 Matte Croco Niloticus 28. We loved Kylie’s outfit and she’s always trying out the hottest new trends.

Another celeb who just rocked feathers was Priyanka Chopra, 37, at Joe Jonas’s 30th birthday party in New York City on August 16. The theme of the party was James Bond 007, and Priyanka slayed her look when she wore a black Ralph & Russo Spring 2019 Couture dress with tons of sheer mesh panels and completely sheer long sleeves, while the rest of the frock was covered in massive fluffy feathers. She accessorized her look with a pair of black Amina Muaddi Adwoa Sandals which were also covered in feathers, as well as Walters Faith Saxon Earrings and a Jimmy Choo Ellipse Clutch.

Cardi B, 26, also showed us how to rock a fierce, feathered look when she stepped out for the start of her Las Vegas residency on April 6. The “Money” rapper wore a stunning pastel green gown with layered feathers by Ralph and Russo to the Kaos Dayclub and Nightclub grand opening. She paired her furry look with pastel green eyes and an oversized hat of the same color. And, Cardi’s not the only celeb who’s rocked the hot trend. 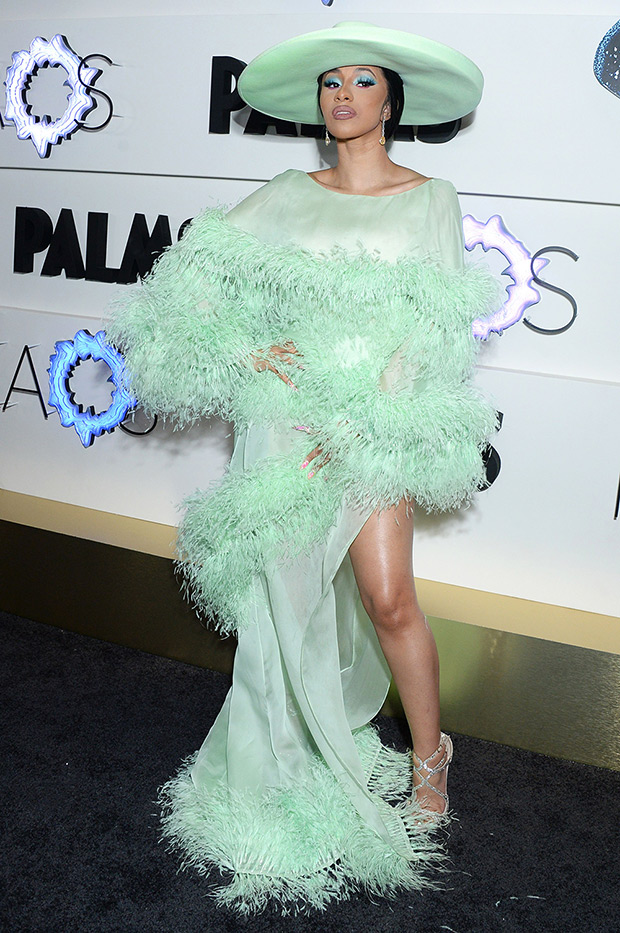 It seems like we’re seeing more and more of this trend on red carpets and it’s a style that’s here to stay. Shailene Woodley, 27, had us seeing red when she stepped out in a feathery number on Feb. 14, at the Virgin Voyages Scarlet Night Party. The actress, who served as the night’s host, plucked the perfect Valentine’s Day outfit from her closet! While feathers are usually seen on glamorous gowns, they covered Shailene’s pantsuit, which featured leather material on the bottom. The daring outfit was the perfect combo of fierce and glam, with her feathers balancing out the edgy ensemble flawlessly.

Meanwhile, the 2019 Grammy Awards were filled with examples of this trend. On the red carpet at the annual awards show, Jada Pinkett Smith, 47, stole the show in a stunning feathery gown. The actress was looking radiant in her number, which featured a deep v-neck and a long train that was covered in feathers all the way to the floor. She also wore silver heels, diamond rings and a long necklace, while keeping her hair in her signature pixie cut. The wife of Will Smith, 50, had the feather trend down pat that night!

The feathery fun continued when J. Lo hit the stage inside the show. The singer performed an epic Motown tribute alongside icon Smokey Robinson, 78, who sang “My Girl,” and host Alicia Keys, 38, who was part of a smooth duet of “Papa Was A Rolling Stone.” Ne-Yo also joined the stars onstage, but it was Jennifer’s outfits that really commanded attention. She STUNNED in all of her onstage look, including a long-line black dress which featured an array of feathers on both sleeves.

This is one daring trend, but it looks like your favorite celebrities are not afraid to rock it time and time again. Click through the gallery above to see all their best looks!