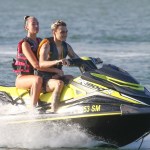 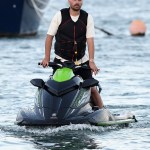 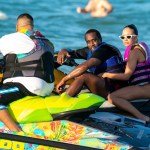 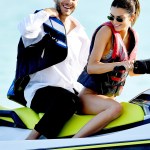 Jet skis are the go-to mode of transportation for celebrities in seaside destinations. That means stars like Dua Lipa and Diddy know how to ride in style, from all that practice!

Some tourists have rental cars, and celebrities have jet skis. It really does seem like stars primarily use the luxurious water mobile for transportation whenever they flock to St. Barts, the Amalfi Coast, Miami Beach, and more locations that demand a lot of ocean time. With the recent holiday season, many stars propelled into the new year on-board their sexy jet skis: take Dua Lipa, 24, and Anwar Hadid, 20, for instance!

The duo were spotted enjoying some fun on the water while in Miami to ring in the new year! On Jan. 3, the pair appeared to be having the time of their lives, as Dua held tight to Anwar’s waist while they cruised around. Of course, the pair remained safe the entire time, wearing life vests as they went to high speeds! Dua appeared to be getting water in her eyes, and had to squint to see, while Anwar drove the jet ski as fast as he could!

Naturally, these two weren’t the only couple who enjoyed some time out to sea. Way before they were Mr. & Mrs., Justin Bieber, 25, and his love Hailey Baldwin, 23, enjoyed some time at Mandarin Oriental hotel in Miami on a jet ski. The pair smirked at cameras while they readied to head out on the water. Instead of swim trunks, Justin sported jean shorts, while Hailey wore a cute bikini. They also wore life vests, showing that they were putting safety first!

Kendall Jenner, 24, is no stranger to having some fun on a jet ski. And she showed that once again! While out with family and friends, Kendall climbed atop a jet ski and headed out on the water for some fun in the sun. With her hair pulled back in a ponytail, she sported a pair of sunglasses to shield her eyes from the Miami sun. The supermodel was all smiles on the excursion while sporting a string bikini and life vest. While it’s currently bitter cold, we have our sights set on warmer weather! These stars had a blast on jet skis and enjoyed the sun over the years. We can’t wait for the tides to turn and head out on the water ourselves. Until then, take a look at the gallery above to see more stars having fun on the water!