What better way to kick off the New Year than with a jet ski ride! It looked like Dua Lipa, 24, and Anwar Hadid, 20, were still having the time of their lives on their Miami getaway on January 3. Dua was joined by her model boyfriend as the pair zipped over the waves in the clear blue water. The singer wore a hot pink life jacket over her black bathing suit and sported her ombre locks in a fun updo, making her still look super chic while soaked from the experience. Honestly, we think the sweetest part of this photo has got to be seeing Dua holding on tight to Anwar while he drives the speedy water mobile.

Meanwhile, Anwar, the younger brother of supermodels Gigi, 24, and Bella Hadid, 23, showcased his hunky tattooed frame in a pair of black swimming trunks. The speed demon had a huge smile on his face while he steered the jet ski across the water. He looks completely happy to be all cozied up with his girlfriend and relaxing with her in the sun and the sand!

The couple has been spending a lot of time together in Miami. They shared a sweet kiss while poolside in the Southern Florida on Monday, Dec. 30, as seen in new photos from their end of year getaway. The Grammy winner showed off her amazing figure in a leopard-print string bikini while squeezing in some R&R at a luxury villa. Meanwhile, Anwar bared his arm and leg tattoos in a pair of dark-colored swim trunks. The bleach blonde couple was joined by a group of friends, who also shared photos and videos of them online. 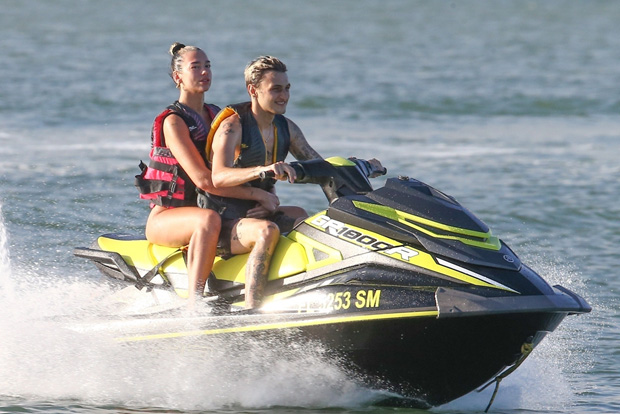 This trip was the perfect way for Dua to unwind after her vivacious performance on NYE. She took the stage on for the 15th annual celebration of Dick Clark’s New Year’s Rockin Eve with Ryan Seacrest and gave a killer performance of her single “Don’t Start Now.”