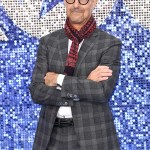 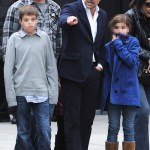 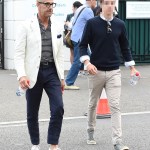 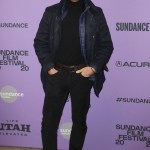 Stanley Tucci’s had a wide-ranging career as an actor and now Emmy Award-winning docuseries host. He also has five children to be proud of! Find out more about his loving family unit here.

Stanley Tucci, 61, is an actor, writer, and producer, with a career spanning numerous films since the ’80s. The New York native also has quite the large family with five children: Isabel, Nicolo, Camilla, Matteo, and Emilia.

Stanley first married Kathryn Spath, a social worker, in 1995 and the couple welcomed twins Isabel and Nicolo in 2000 and then Camilla in 2002, also raising her two children from a previous marriage. Kathryn sadly passed away of breast cancer in 2009, leaving Stanley a widower. “It’s still hard after 11 years, It’s still hard. And it will always be hard,” Stanley told CBS Sunday Morning in January 2021. “But, you can’t let it … and she would never want any of us to ever wallow in that grief and let it take over our lives. She would never want that. She wasn’t like that.”

The Searching For Italy docuseries host luckily found another soulmate in Felicity Blunt, a British literary agent he met via her younger sister, Emily Blunt, aka Stanley’s co-star in 2006’s The Devil Wears Prada. The two met at Emily and John Krasinski‘s wedding in 2010 and later married in a civil ceremony in 2012. The couple now live in Barnes, London and share son Matteo and daughter Emilia together.
Find out more about Stanley’s sweet brood below!

Isabel Concetta Tucci is Stanley and Kate’s eldest daughter, one of two welcomed twins born January 2000. Isabel has lived her life mostly out of the spotlight, only making extremely rare public appearances with her father. Although not too much is known about Isabel, Stanley  has opened up before about his children, sharing with The Atlantic in a May 2020 essay how the family was navigating lockdown amid the COVID-19 pandemic.

“Cramming all these people with differing personalities, ages, needs, wants, etc. in a house for six weeks creates for an interesting dynamic,” the Hunger Games actor wrote. “For the most part, things have been going very well, meaning no one has murdered anyone yet, although I am sure one of them is plotting my demise as I type this.”

Nicola Robert Tucci was born along with his sister January 2000. Also like his sister, he’s mostly stayed out of the spotlight, although he may be following in his dad’s acting footsteps. Per IMBD, the eldest son of Stanley’s made his acting debut in the 2019 TV miniseries MotherFatherSon.

In a September 2010 interview with Reuters, Stanley spoke about his children reacting to his presence on screen and also inheriting his comedic chops. “My kids don’t really like to watch me in movies,” he told the outlet. “They just want me to be me. They’re great kids. They’re incredible. And they’re all really funny. Thank God.”

Camilla Tucci is Stanley and Kate’s third child, born in 2002. Like her twin brother and sister, not much is known about Camilla, and she does prefer to stay out of the spotlight. She does have an Instagram account, although her settings are currently on private.

Matteo Oliver Tucci is Stanley and Felicity’s first child they welcomed together in January 25, 2015 in London. Gushing about the now-7-year-old’s birth, Stanley told PEOPLE at the time, “We are all thrilled that he is here and healthy,” Stanley gushed, while jokingly adding, “I believe he is mine. We are all thrilled to welcome him to this cold, cruel world.” Although the Golden Globe winner likes to keep things low-key and off social media with his family, he gave fans a special view of his life with his kids while speaking with The Guardian in 2017.

“Fatherhood with our young son is great, although it is a little tougher when bending down to pick him up. You’re like, ‘oh, f—k!’ That was quite different 17 years ago!” he exclaimed. “But you know where to put your energy now, whereas when you were younger you didn’t. These days I am much calmer.”

Stanley and Felicity share another child together, Emilia Giovanna Tucci, born April 19, 2018. Stanley again spoke to PEOPLE about his daughter’s birth, confirming she weighed 6 lbs., 6oz. “Hopefully she will have the looks and brains of her mother and one of my better personalities,” the actor joked about his baby girl, now a little over 3-years-old.