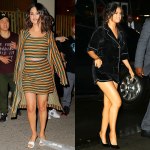 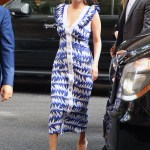 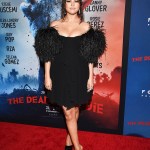 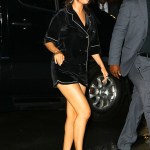 Selena Gomez has been quite busy the past two months promoting her new film, ‘The Dead Don’t Die’ & her outfits for the press tour have been fabulous!

Selena Gomez, 26, has been around the world this past month promoting her highly anticipated new film, The Dead Don’t Die, where she plays the character, Zoe. In honor of the movie officially being released today, June 14, we rounded up all of Selena’s most gorgeous press tour looks leading up to the release. Selena first kicked off her press tour at the 72nd Cannes Film Festival when she arrived at the Palais des Festivals for The Dead Don’t Die premiere, on opening day, May 14, in a drop-dead-gorgeous white satin Louis Vuitton two-piece. The sleeveless bralette and matching maxi skirt hugged Selena’s petite frame perfectly, while the bustier top showed off massive cleavage. Cinching in her tiny waist was a thick white leather belt, as the maxi skirt flowed out into a form-fitting shape. The skirt of the dress featured a subtle quilted material, with seams down the front, while the side had a plunging hip-high slit that showed off Selena’s toned legs. She topped her look off with Bulgari jewels including a stunning diamond choker necklace and a pair of metallic silver ankle-strap sandals.

Later that night, Sels headed to the after party, when she threw on an off-the-shoulder white Louis Vuitton mini dress that featured a low-cut neckline, which showed off ample cleavage, as the sleeves of the dress hung down low on the sides of her arms. The bodice of the dress was a bit baggy, while her tiny waist was cinched in before flowing into a form-fitting A-line mini skirt. The sleeves of the dress flowed down into a gorgeous peplum, that made the sides of the skirt flared, adding a dramatic look. Selena opted to keep her red carpet makeup on that she wore for the premiere, as well as her Bulgari jewels and metallic silver ankle-strap sandals.

Since then, her looks have only gotten better. One of our favorite looks from her was her strapless black Celine Spring 2019 mini dress with massive feather sleeves that she wore to the NYC premiere of the film on June 10. Selena’s black Celine mini dress was strapless and off-the-shoulder, showing off the most insane cleavage we’ve ever seen on the star. The best part of the dress, though, was without a doubt the massive black feather sleeves. The rest of the frock flowed out into a pleated sheath, ending just above her knees. Selena accessorized with a pair of peep-toe black sequin mules and gorgeous diamond Cartier drop earrings and huge rings.

Selena’s after party for the NYC premiere was just as fabulous, as she slipped into a pair of velvet black pajamas later that night. Selena’s look was fitting for the occasion, as it was a late night after party, and the velvet set fit her perfectly. The short-sleeve top was loose and double-breasted with white trim outlining the lapels and sleeves. Down the front of the top were eight chunky gold buttons, which dress up the look a bit more, and she paired the top with a tiny pair of matching short-shorts, also lined with white trim. She topped off her black velvet pajamas with a simple pair of pointy-toed black leather pumps, and choose to keep her glam from the premiere, as well as her dazzling jewels.

Some of her other gorgeous looks included her short purple and green striped sequin Marc Jacobs dress on The Tonight Show Starring Jimmy Fallon, in NYC on June 11, and so many more, which you can see when you click through the gallery above!