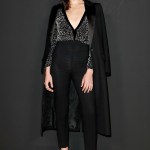 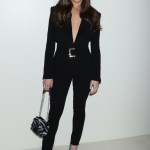 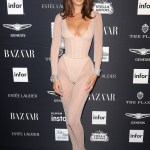 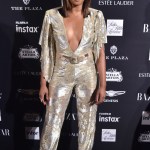 Plunging jumpsuits are all the rage right now! Bella Hadid, Hailee Steinfeld and more stars have been rocking the cleavage-baring look!

Jumpsuits might not sound sexy since they’re a single article of clothing designed to cover most of your body. But thanks to plunging necklines, the one-piece look can still have tons of sex appeal. Celebrities have been rocking v-neck jumpsuits for a while now, and if their outfits during Fashion Week are anything to go by, it looks like the deep cut jumpsuit isn’t going anywhere – and we’re more than okay with that!

Gal Gadot proved the trend is good enough for any Wonder Woman when she showed up to Givenchy‘s Fall/Winter 2019 show on March 3 wearing a plunging black jumpsuit by the designer. The bodice was also embellished with white beads for an added element of interest. The actress wore the look under a black coat and added a pop of color with a bold red lipstick. Black peep toe heels and a silver necklace finished off her ensemble.

Other Celebs like Tiffany Haddish, Bella Hadid and Hailee Steinfeld have also made it clear that they’re big fans of a cleavage-baring jumpsuit during New York Fashion Week last September. The Pitch Perfect 2 star pronounced her love first by wearing a black jumpsuit by Tom Ford for the designer’s Spring/Summer 2019 show on Sept. 5. The piece featured a belt with a jeweled square buckle and a v-neckline that came almost the entire way down her torso. Steinfeld rounded out the look with a black and silver purse and pointed heels.

Haddish went for a glam look when she attended Harper Bazaar‘s ICONS party on Sept. 7. The comedian opted for a belted silver and cream jumpsuit by Rubin Singer that had flare sleeves and a deep v-neck. She accessorized with a silver ring and open toe heels.

At the same NYFW event, Hadid showed up wearing a super sexy pale pink jumpsuit by Mugler. The number featured a more opaque corset underneath the sheer material. The model had on two silver bracelets and clear plastic heels as well. From halters to v-necklines, there are tons of designs that allow a jumpsuit to show off an ample amount of cleavage. Check out the gallery above to see how even more celebrities have styled the sexy look!