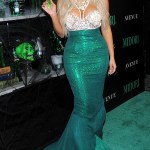 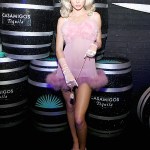 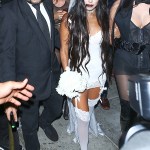 No one does Halloween like the KarJenners! Whether it’s a sexy plunging costume or a revealing bikini, they know how to turn it into a sexy occasion! See their sexiest and spookiest looks EVER.

Halloween 2020 will be here in a matter of 10 days and let’s be honest, does the holiday even happen if you didn’t dress up like a sexy superhero or pop icon, document it, and then post it online? — Hell no, according to the Kardashian and Jenner sisters! No one does Halloween like the KarJenner clan. Maybe that’s because each member of the family is famous and fabulous, but these ladies make sure to go all out for the spooky holiday. But, let’s throw it back to some of our favorite KarJenner costumes through the years, shall we? And may we suggest actually dressing up as one of the sisters this year?

Kim Kardashian always crushes it, whether she’s doing a traditionally sexy costume (Little Red Riding Hood, duh), hosting a Halloween bash as the Halle Berry version of Catwoman, or honoring her idol, Cher, by going as her and husband Sonny Bono from the 70s, with assistance from her best friend, Jonathan Cheban. Maybe her best entry into the sexy Halloween costume hall of fame as when she went as a mermaid to the 2012 Midori Halloween party in New York City. She sparkled and shined in the cleavage-baring costume, which featured a shell bra and a figure-hugging (what else?) mermaid skirt and train. The costume was so good that she later recycled it for daughter North West‘s mermaid-themed birthday party!

She also stunned last year when for one of her costumes, she dressed up like Elle Woods from Legally Blonde and wore a silky pink dress and pink shades. She topped it off by making sure to include her pooch in a large black bag just like Reese Witherspoon does while in character in the film.

Kylie Jenner‘s costume in 2016, Dirrty-era Christina Aguilera, complete with leather chaps and black highlights, is one of our favorites. Especially because Christina herself approved! “YAASSSSS… Killin it @kyliejenner yes to dirrty 2016!! Get it girrrl!!!” Aguilera wrote online that year, sharing one of the Kylie Cosmetics mogul’s snapshots. What a compliment!

Kourtney Kardashian also turned heads in sexy costumes from last year! One of the looks she went with was a sexy cowgirl, which can be seen below, and it included a pink top with fringed sleeves, metallic silver short shorts, white boots, and a cowboy hat.

To see more of the Kardashians and Jenners’ sexiest Halloween costumes, like Kim and Kourtney doing their own takes on Catwoman, scroll through our gallery above. The sisters seriously kill it every year!