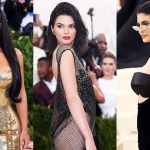 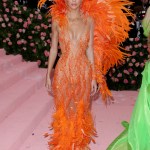 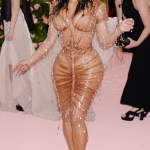 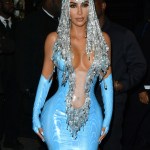 The 2020 Met Gala may have been indefinitely postponed, but that hasn’t stopped us from reminiscing about the gorgeous looks served up by the KarJenners in the past! We’re looking through some of our very favorites!

It’s no secret that the Kardashian and Jenner sisters know how to rock a red carpet. Kourtney Kardashian, Kim, Khloe, Kendall Jenner, and Kylie have all developed their own unique sense of style and have shown it off with full confidence at major events. But one place where the sisters always shine is none other than the Met Gala! Even though the event is canceled this year due to the ongoing COVID-19 outbreak, we’re still thinking on the KarJenner sisters’ hottest looks from the fashion event!

At the 2018 Met Gala, Kim looked like an absolute goddess in her gold gown. The stunning mogul wore a skintight Versace dress to the event and looked positively flawless, flaunting her curves. The theme of the night was Heavenly Bodies: Fashion and the Catholic Imagination and Kim nailed it. Her dress featured two crosses and Kim also wore the religious symbol as a necklace. Kim’s eyes were highlighted by intense, bold makeup, while she fashioned her hair in a high ponytail. She truly looked like a heavenly body!

While attending the 2019 Met Gala, the sisters got quite creative with their looks! Kendall and Kylie complimented one another perfectly in their bold lilac and orange gowns. Both dresses were designed by Atelier Versace and played on the Camp theme with their vibrancy. Kylie even matched her hair to her dress, something she would do later that night at one of the Met Gala after parties! Kim, meanwhile, wore Thierry Mugler and her waist looked so incredibly tiny in the cinched garment, which featured dangling beads! All three sisters looked so bold and fashionable in their looks, it was hard to take our eyes off of them!

But there are so many more incredible looks to see from this famous family! Check out the gallery above to see more images of the KarJenner sisters at the Met Gala.