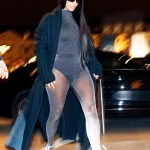 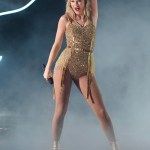 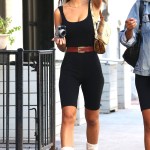 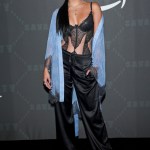 From the red carpet to the stage to the streets, bodysuits have become a versatile fashion choice! Celebrities have been rocking the trend like crazy lately, and we rounded up our favorite looks.

Bodysuits remain one of the most popular fashion trends in Hollywood. You can rock a bodysuit for a casual look or wow on the red carpet. Almost every major star has stepped out in bodysuits at least once over the past few years. Despite being fitted one-piece suits, bodysuits aren’t just for summer. You can wear bodysuits all year round by pairing them with long jackets, blazers or even pants! However, there’s nothing wrong with wearing a bodysuit on its own, too, which many stars have also done.

For instance, Taylor Swift hit the stage at the American Music Awards in Nov. 2019 and she wore a gorgeous gold bodysuit for her performance. The glittering ensemble featured fringe detail on the side, and Taylor wore mesh tights to cover up her legs. Meanwhile, Cardi B has been busy at multiple concerts and she’s always hitting the stage in sexy bodysuits. She notably stepped out at Rolling Loud Miami in a bright pink bodysuit. The look was completed with Cardi’s long pink wig and pink sequined booties. She also dazzled in a sequined silver bodysuit at the 2017 VMAs, complete with matching thigh-high boots.

Fellow artist Halsey sizzled in a red leather bodysuit at the 2019 Billboard Music Awards. The bodysuit featured a huge buckle at the waist and on the right shoulder. Beyonce really upped the game when it came to bodysuits when she was on her On The Run II tour. She wowed in custom Balmain bodysuits and more.

Bella Hadid used a sexy bodysuit to change things up from wearing a typical gown to the Haper’s Bazaar Icons party. She wore a daring nude bodysuit by Mugler. The custom look featured a waist-cinching corset, sheer top, high-waisted briefs, and matching nude tights. Her outfit was one of the most notable looks of the night. By the looks of it, bodysuits aren’t going to go out of style any time soon, and you can click through the gallery above to see more stars rocking the look!