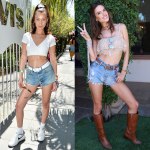 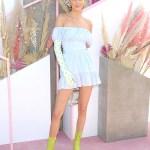 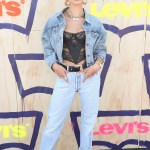 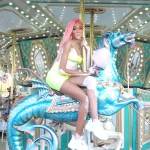 With Coachella postponed this year due to the ongoing COVID-19 outbreak, we’re reminiscing on the best looks celebs wore to the major music festival! Take a stroll down memory lane with Kylie Jenner, Bella Hadid, and more!

As the novel coronavirus pandemic persists, it seemed inevitable that music festivals, tours, and more would be canceled due to growing health concerns. On March 9, 2020, organizers for Coachella made the difficult call to cancel the biggest music festival known to fans, which was originally scheduled for April 10-12 and 17-19. Instead, the show will go on — just at a later date. Coachella was rescheduled for October 10 and 16, where fans will, hopefully, get to see acts like Frank Ocean, Travis Scott, and many more!

While so many are missing the sound of the music, the cheering crowds, and amazing spectacle, we’re yearning for the amazing fashion and style that Coachella brought out of the many famous faces who attended. As such, we’re taking a look back at some of the very best looks over the years! Anything goes when it comes to Coachella fashion, and that means it’s not uncommon to see people walking around the festival in bikinis and tiny outfits. Olivia Culpo attended a pool party brunch at the event one year, and she looked amazing in a stylish, off-the-shoulder bikini, which she styled with a white wrap skirt.

Bella Hadid is another star who loves hitting up Coachella. She attended a party at the festival in 2018 wearing tiny daisy dukes and a white crop top. The outfit was simple and comfortable, which was perfect for being outdoors in the California heat. Her accessories were a huge part of the outfit, though, and really took it to the next level — Bella rocked a white scrunchie, a body chain and white belt, while completing the look with white sneakers. Perfection! Hailey Baldwin took a similar approach by wearing high-waisted jeans and a lacy white crop top, which put her abs on full display.

Kylie Jenner has emerged into a Coachella Queen over the last few years, and she goes all-out with her looks at the festival. One of Kylie’s signature Coachella moves is to wear different, colorful hairstyles. Through the years, she’s rocked neon green hair, rainbow hair, hot pink hair, orange hair and MUCH more at the festival. There are plenty of amazing Coachella style moments from over the years, and you can check them out in the gallery above. From Nina Dobrev to Beyonce and PLENTY more, these stars are great people to get your festival inspo from  for when Coachella returns in October!