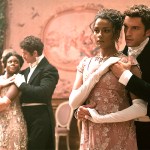 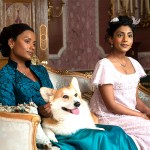 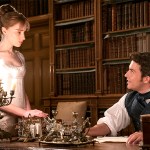 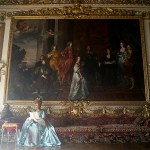 ‘Bridgerton’ has become the biggest TV sensation, and fans are hungry for season 2. Lady Whistledown can now report we’ve officially got a date for the Ton to return! Get all the latest updates!

Alert the Ton! The first season of Bridgerton was a smash hit, and season 2 is expected to make just as big of a splash. Bridgerton season 2 is already underway and focusing on a new Bridgerton family member. The second season was confirmed on Jan. 21, 2021 and now we have the official date for when we can tune in. The news spread like a rumor in the Ton, which would make Lady Whistledown very happy.

The cast and crew of Bridgerton filmed the second season throughout 2021, but there were definitely some unexpected hiccups. HollywoodLife has rounded up all the key information you need to know about Bridgerton season 2. From the cast, to the release date, to the latest on filming, the Bridgerton scoop you want and need is all here. Get ready to see a whole lot more of the very handsome Viscount, a.k.a. Lord Anthony Bridgerton.

On Christmas Day, Lady Whistledown decided to gift us all with the news that Bridgerton will officially be returning on March 25, 2022. In a cheeky video shared on Dec. 25th, cast members Jonathan Bailey, Simone Ashley, Golda Rosheuvel, Luke Newton, Claudia Jessie, Charithra Chandran, and Adjoa Andoh read a Whistledown column that revealed the exciting date. The news comes on the exact one-year anniversary of Bridgerton’s release on Netflix last year, which truly has been the gift that keeps on giving! Mark you calendars, for the return of the Ton!

‘Bridgerton’ Production Gets Shut Down

Filming the second season has come with some complications. Season 2 has been shut down twice already because of COVID-19. Filming was paused for 24 hours starting July 15 after a crew member tested positive for COVID-19, Deadline reported. 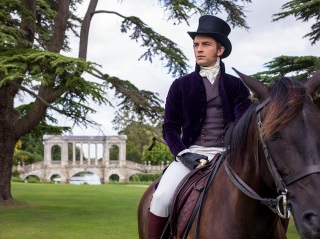 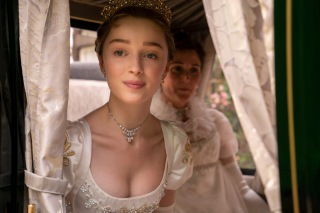 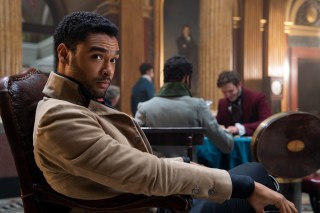 Just days later, production was halted again after another person working on the show tested positive for COVID-19. According to Deadline’s latest report, filming has stopped for an “indefinite period of time as the streamer and producers at Shondaland establish a timetable for a safe return amid the Delta variant of coronavirus surging across the UK.” Netflix did not reveal whether it was a cast or crew member who tested positive. The person is now in isolation.

Shonda Rhimes, who serves as a producer of the show, tweeted to her nearly 2 million followers on Jan. 21 that “more #Bridgerton magic is coming soon,” along with a video celebrating this momentous occasion. The Netflix show became an instant hit when it launched on Christmas Day in 2020. The streaming service said that the Shondaland series was on par to reach 63 million households within 28 days of its Christmas Day debut, according to Variety.

Bridgerton cast member Luke Newton celebrated the start of season 2’s production with a few behind-the-scenes photos and videos. “The boys are back in town,” Luke captioned his Instagram post that also featured Jonathan Bailey and Luke Thompson. After fans thought this was the first look at season 2, Luke commented on his own post, “These were taken during S1. We are back, but I can’t possibly show you just yet.”

Bridgerton season 2 was announced on Jan. 21, less than a month after the first season debuted on Christmas Day. Netflix confirmed the second season renewal via social media and revealed Bridgerton season 2 filming would begin in the spring of 2021. There was no word about a potential release date.

Lady Whistledown wrote a long letter to fans about what’s ahead. “Dear Readers, I dare say this may be the most exciting edition of my column yet…” the announcement started out. The full announcement letter reads:

Dear Readers, I dare say this may be the most exciting edition of my column yet… pic.twitter.com/jwOJwl6zQi

“The ton are abuzz with the latest gossip, and so it is my honor to impart to you: Bridgerton shall officially return for a second season. I do hope you have stored a bottle of ratafia for this delightful occasion.

The incomparable cast of Bridgerton will return to production in the Spring of 2021. This author has been reliably informed that Lord Anthony Bridgerton intends to dominate the social season. I will have my pen ready to report on any and all of his romantic activities.

However, gentle reader, before you set the comments section alight with requests for more sordid details, know that I am disinclined to report on the particulars at this time. Patience, after all, is a virtue.”

Bridgerton is set in Regency Era London, but the first season was filmed primarily in the city of Bath in England. The museum No 1 Royal Crescent is used as the exterior of the Featherington home, according to Bath Echo. Other Bridgerton filming locations in Bath included Abbey Green, Bath Street, Holburne Museum, and the Banqueting Room at the Guildhall. Given that season 2 will take place within the same time period, many of the filming locations will likely stay the same.

As Lady Whistledown’s announcement said, the beloved cast will be returning for season 2. Given the season’s focus on Lord Anthony Bridgerton, that means Jonathan Bailey will be returning. He spoke with Entertainment Tonight on Jan. 21 about the highly-anticipated season and preparing to return to the role of the dashing Viscount. Simone Ashley has been cast in the coveted role of Kate in season 2.

“Well, I think you can tell from the length of my beard that I’m starting to grow [my] mutton chops,” Jonathan told the outlet. He also admitted that he’s been staying in shape ahead of filming season 2. “I’m actually doing a lot of paddleboarding at the moment and swimming in the sea because I live on the coast.”

Since the main focus of the show is shifting to Anthony Bridgerton, Bridgerton creator Chris Van Dusen weighed in about whether or not Regé-Jean Page and Phoebe Dynevor would be back as Simon and Daphne, the couple at the center of season 1. “I hope so,” Chris said on Today With Hoda & Jenna on Jan. 21, according to Deadline. “They are now, of course, the Duke and Duchess of Hastings but in my mind, they will always be Bridgertons and I think they will always be part of the show.”

Your Grace, it has been a pleasure. 💜🐝 pic.twitter.com/kX1nIG8pz7

On April 2, Netflix announced that Regé-Jean would not be returning for season 2. “While all eyes turn to Lord Anthony Bridgerton’s quest to find a Viscountess, we bid adieu to Regé-Jean Page, who so triumphantly played the Duke of Hastings,” the announcement said. “We’ll miss Simon’s presence onscreen, but he will always be a part of the Bridgerton family. Daphne will remain a devoted wife and sister, helping her brother navigate the upcoming social season and what it has to offer — more intrigue and romance than my readers may be able to bear.” However, Phoebe will be back.

Other than Jonathan, Netflix hasn’t made any announcements about who’s returning and who’s not. The following cast members — in addition to Jonathan and Phoebe — are expected to return in some capacity in season 2: Nicola Coughlan as Penelope Featherington, Luke Newton as Colin Bridgerton, Claudia Jessie as Eloise Bridgerton, Luke Thompson as Benedict Bridgerton, Ruth Gemmell as Lady Violet Bridgerton, Polly Walker as Lady Portia Featherington, Adjoa Andoh as Lady Danbury, Golda Rosheuvel as Queen Charlotte, Ruby Barker as Marina Thompson, and Julie Andrews as the voice of Lady Whistledown.

What Happened In Season 1

The first season, which was based on Julia Quinn’s The Duke And I, followed Simon, the Lord of Hastings, and Daphne Bridgerton’s love story. The two married, making them the Duke and Duchess of Hastings. After some slight hiccups, they found happiness together and welcomed a baby boy at the end of the season.

Anthony was caught up in his own love story, albeit a secret one, in season 1. After a back-and-forth with his mistress, Siena, she broke things off for good by refusing to go to Simon and Daphne’s ball with him. Anthony then vowed to find a wife without finding love.

Meanwhile, Eloise was on the hunt to find out the identity of Lady Whistledown throughout the first season. She was convinced that Madame Delacroix was Lady Whistledown, but she was proven wrong. Eloise’s own best friend, Penelope Featheringon, revealed herself as Lady Whistledown in the final moments of the season, but only the audience knows of her identity at the moment.

What Will Happen In Season 2

Bridgerton is based on Julia Quinn’s best-selling Bridgerton book series. Season 2 will focus on Anthony Bridgerton just as Julia’s book, The Viscount Who Loved Me, does. The second book in her series follows Anthony’s journey. He claims to have sworn off love, but that vow doesn’t hold for long.

Anthony sets out to just marry the “Incomparable” of the 1814 social season, who is none other than Edwina Sheffield. On this quest, Anthony meets Edwina’s half-sister Kate Sheffield. Sparks immediately fly between them, but they’ll do anything but admit that at first. They have the ultimate enemies to lovers romance. The casting of Kate Sheffield has yet to be announced.

Jonathan Bailey teased to Entertainment Tonight that Bridgerton season 2 is “just going to get more exciting and convoluted and sexier, I think.” He also noted that the show will “be pushing boundaries every single way” and “the story is going to be really exciting.” Chris Van Dusen teased Anthony’s arc on TODAY as well, according to TVLine, “We left him at the end of the first season at a bit of a crossroads, so I’m looking forward to jumping in and discovering how he fares on the marriage market.”

Season 2 will also explore more of Edmund Bridgerton, the late patriarch of the family. He’s talked about frequently in the first season, and the second book dives much more into Anthony’s relationship with his father and how he dealt with his father’s death. Edmund died of an allergic reaction to a bee sting. The end of season 1 hinted that a second season would focus on Anthony. A bee can be seen hanging out on the windowsill right after Daphne gives birth. Given his father died from a bee sting, Anthony understandably has an intense fear of bees.

And the story doesn’t stop there. Julia’s Bridgerton series includes 8 novels total focusing on the 8 Bridgerton siblings. The books following The Duke and I and The Viscount Who Loved Me are An Offer From a Gentleman, Romancing Mister Bridgerton, To Sir Phillip, With Love, When He Was Wicked, It’s In His Kiss, and On the Way to the Wedding.

How To Watch ‘Bridgerton’