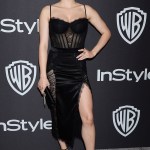 Happy Birthday, Ariel Winter! The ‘Modern Family’ actress has rocked some incredible looks over the years and to celebrate her birthday we’re looking back on her best red carpet styles!

There’s no question about it, Ariel Winter‘s red carpet style has truly impressed us over the years. And to commemorate her 22nd birthday, we’re taking a look back at some of her best looks! The Modern Family actress’s evolution from budding teen starlet to young woman on the rise has truly captivated her fans, and so much of that has to do with her flair for fashion. Whether she’s rocking a classic cut or going for a contemporary edge, Ariel always shines on the red carpet!

One such moment when Ariel went for a more modern look was at the premiere of her film Dog Years. The then 19-year-old was dazzling in a sequined mini-dress she wore on April 22, 2017 to the Tribeca Film Festival debut of the movie. The intricate detailing throughout the ensemble glistened, as the halter dress fit her body perfectly and accentuated her figure to a tee. With the hem hitting a number of inches above her knees, Ariel paired the dress with a pair of pointed toe black heels. As the centerpiece of her look, Ariel opted to go for minimal accessories, simply adding a pair of stud earrings. Her long, raven black hair was worn down her back and Ariel’s makeup brought out her best features.

From premieres to parties, Ariel brought out a sexier lace look for the Jan. 6, 2019 Golden Globes after party! The starlet fashioned a gorgeous Epuzer dress that was positively scintillating while posing for cameras before she entered the Warner Bros./ InStyle soiree. The bustier top fitted her perfectly, as the lace overlay gave a fiery flair to the classic cut. A sexy slit up one of Ariel’s legs showed off her toned form perfectly. Keeping the dress the main draw of her look, Ariel wore only a few rings and pulled her hair back in a tight bun.

While black never goes out of style when it comes to formal wear, Ariel hasn’t shied away from sporting the opposite shade on the color spectrum. Upon arriving to the Spotify Pre-Grammy Awards party on Jan. 23, 2020, Ariel truly stunned in a corset-inspired dress. Ariel’s white silk dress featured a tight bodice with molded cups, and a fitted pencil skirt with lace panels on the sides and hem. Among the embellishments on Ariel’s dress, the ensemble featured two see-through panels going down the side of her skirt and her ribs! It was such a mature look for the young star! Ariel’s style has always been such a draw to her star power. The Modern Family actress has truly grown up before fans’ eyes and we cannot wait to see how her style evolves in the years to come. To see more pics of Ariel’s red carpet looks over the years, click through the gallery above!