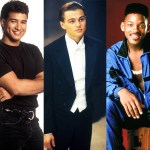 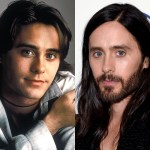 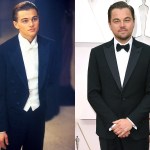 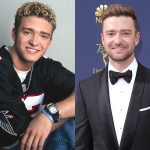 Some of our favorite 1990s dreamboats have truly aged like fine wine! From Leonardo DiCaprio to Jared Leto, we’re looking back at the male stars who are just as handsome as ever.

The 1990s produced countless male heartthrobs, both on the big and small screen. Now, more than two decades later, these guys are just as gorgeous as when we first met them as baby-faced actors. Who could forget Leonardo DiCaprio as Jack Dawson in 1997’s movie blockbuster Titanic. While he’d been an actor since he was a child, the role propelled him to international dreamboat leading man status as he wooed Kate Winslet‘s Rose aboard the doomed ocean liner. However, Leo didn’t want to be typecast as a sex symbol. As he aged, he took on gritty and challenging film roles that led to his winning an Oscar on his fifth nomination, snagging Best Actor for 2016’s The Revanent. He’s still one of Tinseltown’s top leading men thanks to his good looks that never faded — in addition to his insane talent.

Jared Leto is another actor who started out a young Hollywood heartthrob and morphed into an Oscar winning actor…and added bona fide rock star to his resume! He became the ultimate teen crush of the mid-’90s playing high school hottie Jordan Catalano on the short-lived 1994 ABC drama My So-Called Life. Like Leo, Jared didn’t want to be typecast as a sex symbol and preferred to be known for his acting chops. He lost 40 pounds to portray AIDS patient Rayon in 2013’s Dallas Buyer’s Club, which won him a Best Supporting Actor Oscar. He’s still SO sexy though, and lets that side of him out as the lead singer of the alt-rock band 30 Seconds to Mars. He turned 48 in Dec. 2019 and looks like he hasn’t aged a day since the 90’s.

Justin Timberlake became the breakout heartthrob of NSYNC when the boy band hit it big in the late ’90s. His tight blonde ringlets and romance with pop princess Britney Spears set him apart from the rest of the members. He went on to launch a successful solo career in 2002 with his debut album Justified. Gone were his famous boyish curls, and his smooth, sexy stand-alone voice won him even more admirers. Justin maintained his hottie status from his teenage boy band days throughout the next 20 plus years, as he’s an accomplished solo artist who turns 40 in Dec. of 2020. And still SO handsome!

There are some stars who literally do not age. Paul Rudd is admired by his Hollywood peers and fans everywhere for maintaining his youthful looks for several decades. When he turned 50 in Apr. 2019, his insanely youthful appearance became a top trending Twitter topic. Fan showed side-by-side pics of him from his breakout role in the 1995 romantic comedy Clueless to his current look, and there was nary a change to his adorable face. Today he is one of Hollywood’s most in-demand comedic actors, and even has crossed over into the Marvel Cinematic Universe as Ant Man. Yet he still looks like he’s in his 20’s! You can check out the gallery above to see 13 of the biggest 90s heartthrobs who are still as sexy as ever.