Zendaya won her very first Golden Globe Award at the 2023 show on Jan. 10. The actress was not in attendance for the ceremony, but was named the winner of Best Actress In A Drama Series for her portrayal of Rue in HBO’s Euphoria. She took to Instagram after the show to share a behind-the-scenes shot from the Euphoria set, along with a touching caption that addressed her win. 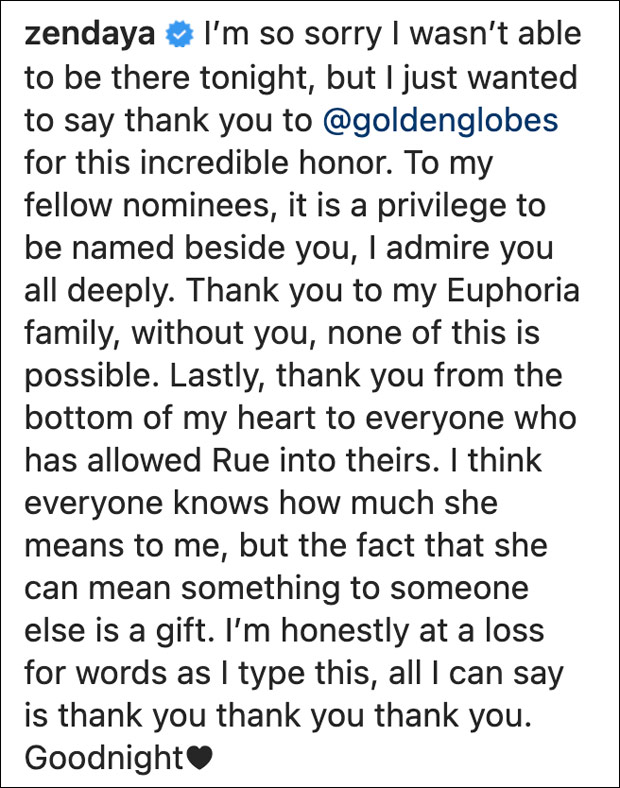 “I’m so sorry I wasn’t able to be there tonight, but I just wanted to say thank you to Golden Globes for this incredible honor,” Zendaya wrote. “To my fellow nominees, it is a privilege to be named beside you,  admire you all deeply. Thank you to my Euphoria family, without you, none of this is possible. Lastly, thank you from the bottom of my heart to everyone who has allowed Rue into theirs. I think everyone knows how much she means to me, but the fact that she can mean something to someone else is a gift. I’m honestly at a loss for words as I type this, all I can say is thank you thank you thank you.”

While this was Zendaya’s first Golden Globe nomination, it’s not the first time she was recognized for playing Rue. In both 2020 and 2022, she won Outstanding Lead Actress in a Drama Series at the Emmys for her work in Euphoria. It was in 2020 that she made history, when she became the youngest actress ever at age 24 to win the Emmy for Outstanding Lead Actress in a Drama Series. It was such a monumental moment that even Drake congratulated her. “It was a LOCK,” he said at the time.

Euphoria, which premiered in June 2019, was renewed for a third season in February 2022. However, production of season three won’t start until this February, with a potential fall release. HBO’s CEO Casey Bloys also told Screen Rant that the series, which follows a group of high school students as they navigate love and friendships in a world of drugs, sex, trauma and social media, would not go beyond four seasons — and it might end after season three. It’s a bummer, but we’re happy Zendaya is getting recognized for her stellar work on the series.