Sam Smith, 30, was brutally fat-shamed online, which did not go over well with the singer’s die-hard fans. Online trolls used Twitter to attack Sam and their weight after the “Unholy” singer wore a fabulous glittery jumpsuit to perform at Capital’s Jingle Bell Ball in London on Dec. 10. The jumpsuit was actually similar to one that Harry Styles, 28, previously wore in concert. But while Harry was praised for his look, Sam was cruelly ridiculed and attacked. Luckily, Sam’s fans came to their defense and called out the “gross” body-shaming comments on Twitter.

“It’s actually gross constantly seeing people tear into Sam Smith for their appearance when there’s a lot of us, myself included, who have a similar body type to them. God forbid a queer person dresses/expresses themself unapologetically, apparently only thin people are allowed,” one fan said while defending Sam, who is genderqueer and non-binary, and uses they/them pronouns.

It’s actually gross constantly seeing people tear into Sam Smith for their appearance when there’s a lot of us, myself included, who have a similar body type to them. God forbid a queer person dresses/expresses themself unapologetically, apparently only thin people are allowed 🤡

Another fan shared a side-by-side picture of Sam and Harry in their respective jumpsuits, writing, “I see a lot of people trashing Sam Smith for wearing this fab jumpsuit but praising Harry Styles for wearing basically the same thing. Gross.”

The double standards between Sam and Harry was noted by a different fan, who said on Twitter, “Sam Smith is a gay nonbinary performer who has been doing this long before Harry yet there were articles and tweets calling Harry a ‘gay icon.’ Lets not forget to mention Sam is plus-sized. Y’all just hate queer and fat ppl.”

has sam smith done anything harmful? or is everyone just being disgustingly fatphobic.

fatphobia within the queer community is such a huge issue, and i am sure nobody is wanting to perpetuate that! all i see sam doing is being confident and comfortable, and i am happy for them. 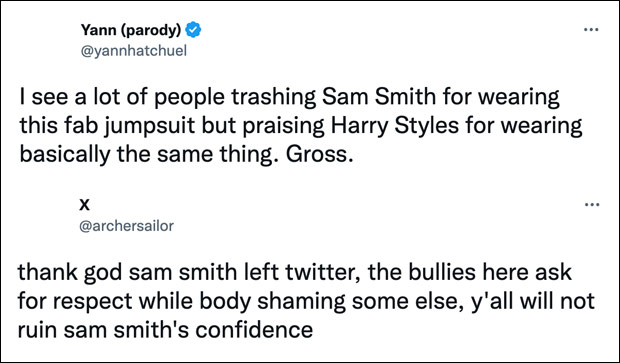 right when Sam Smith starts to show their full queerness everybody has a bad thing to say about them. i don't like that

Sam started their weight loss journey in 2015, and they consistently lost more weight over the following five years. Sam showed off their incredible 50 pound weight loss on The Late Show with Stephen Colbert in October 2020. Sam performed their songs “Diamonds” and “Kids Again” from their album Love Goes on the late-night talk show while proudly debuting their slimmed-down look.

After Sam began losing weight, they told 60 Minutes Australia that they stopped letting food “control” them. Sam revisited the topic two years later, in 2017, and explained how they adopted healthy habits that affected their day-to-day life. The “Stay With Me” singer hired a nutritionist and personal trainer and told Billboard that they work out three times a week, lifting “too many weights.”

Related: Harry Styles’ Grammy Wins: How Many He’s Won So Far & For What