Lawyer Jen Jordan flipped a Republican-held district in 2017 to win a Senate seat, and now, she is determined to out the state’s long-term Republican Attorney General, who she calls, “The strongest advocate for Georgia’s new ‘heartbeat’ anti-abortion law,” in an EXCLUSIVE interview with HollywoodLife.

The new law, which went into effect after the Supreme Court overturned Roe V. Wade, penalizes doctors with up to 10 years in prison for performing an abortion after about six weeks. But it does something even more significant – it recognizes an embryo and fetus legally as a “person.” That means that today in Georgia, every embryo is considered a “person” with full legal rights and that now means that they are considered a tax deduction and a woman can be awarded child support for her unborn baby.

This is a legal first in the country and will have enormous impacts on women, health providers and potentially every person in Georgia. However, Jen Jordan, 48, has been finding that many of the women that she is meeting on the campaign trail are still totally unaware of the new law and its full effects.

“People had no clue exactly how bad it was,” Democratic candidate Jen Jordan tells HollywoodLife. “So what we are trying to do as much as possible, and without judgment, is just tell people what the impact is, and they’re horrified.” She says that Republicans in Georgia are conspicuously silent about the new law during the mid terms campaign and she guesses that as part of that ‘keep it quite’ strategy, no one will be charged and prosecuted under the new law until after the midterm election on November 8. 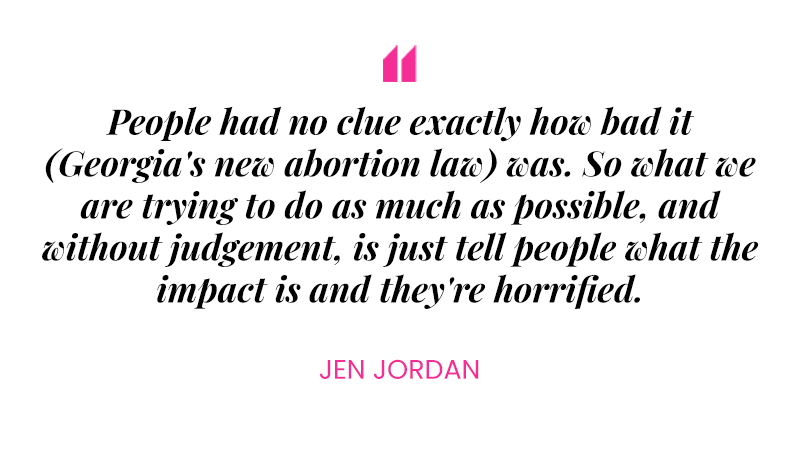 “I think probably the powers that be have told everybody to just put everything on ice,” she says, implying that Republicans know that if women and their families become aware that abortion is now virtually banned in the state and that embryos have “personhood” rights, they may vote for Democrats. So they have opted for silence. When Jen does explain to voters what the law does, they have a shocking moment of realization. At first, she explains “people were kind of like, ‘Why is she talking about that?’ But once they get it, it’s like, ‘Are you kidding me? Like there is no way.’ But it’s like, yes there is a way, and it’s now the law.”

Jordan is running for Georgia’s Attorney General in the mid term election, after serving as a Senator in the state Legislature, because she wants to be an Attorney General for “the people” and not for one political party. “The current Attorney General [Chris Carr] just kind of views himself as an extension of the governor’s office [Brian Kemp], and does his bidding,” she claims. “So, for me, it’s really important to show that I am independent of that, and it really doesn’t matter who’s in the governor’s office, or the White House, my office is going to function the same, and it’s really going to be about the people.”

She wants to make it clear to voters “that when I’m Attorney General, I’m going to wake up every single day and work for their interest and put them first and not just use the office of AG as some kind of partisan agency that is just pushing Republican talking points.”

As Jordan crisscrosses the state talking to voters, she says she sees that “people don’t feel safe, and whether you don’t feel safe because of the record gun violence, and that street gangs are out of control, this isn’t an Atlanta problem, it’s a Georgia problem. And so, whether it’s even having environmentally clean air or clean water, or going to your doctor’s office and not feeling like you’re safe there to even have an open and honest discussion and get good care from your doctor, people just aren’t feeling safe.”

As for her opponent Chris Carr, who has been in office for 6 years, since 2016, she says he is “a lot of talk. I mean, he says a lot, but he doesn’t do much” about gun violence, gang violence, and crime. She knows that Democrats have to battle the perception that they are soft on crime, but she points out that in Georgia, it’s the Republicans “that have been in charge,” while the gun and crime problems have gotten worse across the state. 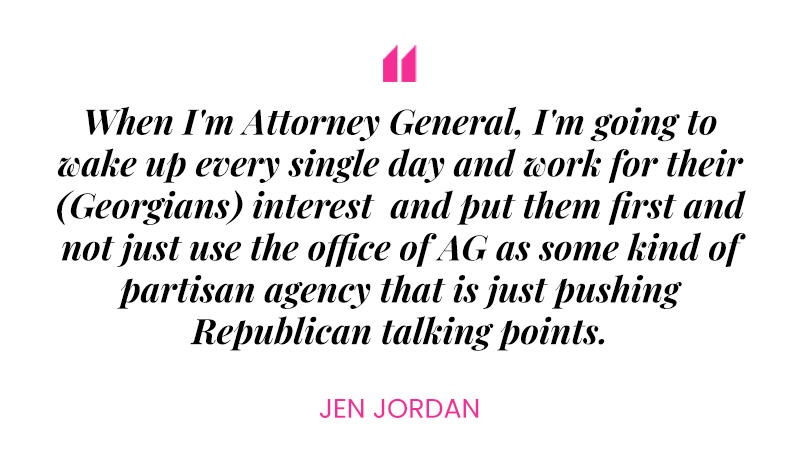 In fact, it’s the Republican dominated Georgia Legislature which passed, and then the Republican Governor Brian Kemp who signed in April of this year., a “constitutional carry” law, which allows most residents to carry a concealed firearm without a license.

“I call it the guns everywhere bill, but basically, you don’t even have to apply for a permit to carry a gun anywhere… and we already had pretty lax gun laws here,” Jordan points out. “We have these problems and instead of trying to fix the problem, you know, we’re just throwing gasoline. It’s going to make it much worse.”

If elected, Jordan wants to work to take guns off the streets instead of adding to them, as a way to reduce gun violence in the state. She plans to work with federal agencies, which have jurisdiction over gun regulations in order to do this.

While Jordan is a successful lawyer, who attended the University of Georgia Law School and was a member of the Georgia Law Review, she did not come into this world with a silver spoon in her mouth. She was born at Camp LeJeune in North Carolina, and after her parents’ divorce, she moved with her mom to South Georgia, where her mother worked as a hairdresser in a beauty salon. Jen spent hours at the beauty shop, helping her mom by cleaning up.

Who knew that her beauty shop background would be an icebreaker and connector for her during her Attorney General campaign? “I’m just this middle-aged lady with kids. I’m not the coolest person. I’m not exciting… but it’s always interesting to see who responds,” she said. “And to me, when we start to talk about my background in terms of being raised in a beauty shop, and that has been the singular thing that people have attached to most in part because their mothers were hairdressers, or they are hairdressers, or they all go to hairdressers… And also, it really kind of goes over racial lines too, right? Whether you’re talking to Black women, Black men, White women, you know they all can relate to the beauty shop or the barbershop really being kind of the heart of the community and just how important of a role it plays. And so this is the kind of thing that brings us all together. And so that was surprising.” Learning from this, Jordan is now holding campaign events at beauty shops across Georgia. Smart.

Now, what does Jordan think of the scandal surrounding US Republican Senate Candidate Herschel Walker, who was accused of paying for an abortion of a former girlfriend, who later bore him a son, after she refused to get a second abortion? “What I’ve said publicly is that every woman in Georgia should have the ability to access care and make the decision that Walker and his partner were able to make,” she says.

Of course, right now, most Georgians don’t have the right to make that decision. If Jordan is elected, she may not be able to do anything to overturn it, but she says she will respect the decisions that local district attorneys may make, not to charge doctors and other providers for providing abortions.

She asserts that her opponent, Chris Carr, on the other hand has been telling local district attorneys that if they don’t prosecute doctors, he’s basically going to come after them. He has said it is a “dereliction of duty if they do not.” She explains that one of the bedrocks in this country is supposed to be “prosecutorial discretion,” for local district attorneys to make their own decisions about what and who to prosecute. 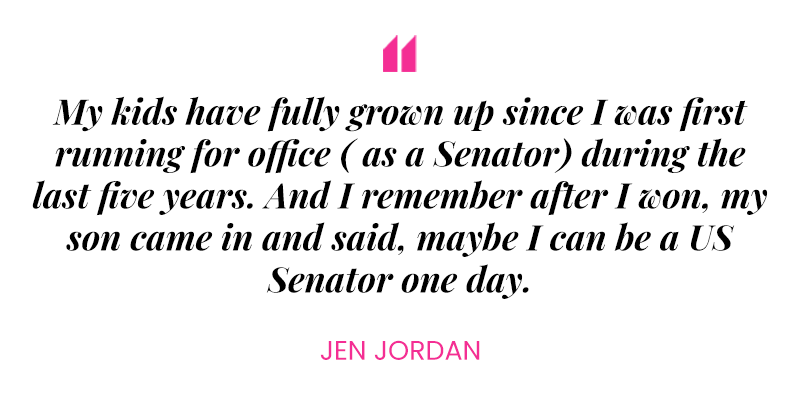 She also explains that as Attorney General, she would work on giving guidance to businesses and agencies on the “personhood” issue. For example, if an embryo has the full legal rights of a person, can you ever deport a woman if she is carrying a fetus that was conceived  in the US and therefore would be considered a US citizen in Georgia ? Can you put a pregnant woman in jail because that would infringe on the embyro’s legal rights? Could a woman who is here illegally be entitled to social welfare benefits that the state provides, because the embryo is entitled to those? As Jordan points out—the new anti-abortion law has opened a “Pandora’s Box.” There will be a lot to give guidance on.

While Jordan is hopeful that she will be successful when Georgia voters finish casting their ballots, she certainly has a family of enthusiastic supporters: her husband Lawton, who is a real estate business lawyer, and her two children: son, Lawton, 17, and daughter, Cokie, 13.

“My kids have really grown up since I was first running for office [as a senator] during the last five years. And I remember after I won, my son came in and said, ‘Maybe I can be a US Senator one day.'” She feels it’s very, very important that more women run for office so it becomes “much more normalized and it’s not a big deal.” She also feels very lucky to have a partner, like her husband, who is willing to “put up with this and support you, and he’s been incredible. So, I’m a very lucky person.”

Jordan is a candidate on the roster for the progressive political action committee Her Bold Move, which offers support to progressive women running for office.

But for now, she is not counting on luck to propel her into office. Instead, she urges Georgians, to get out and vote. Early voting has already started in the state. Says Jen: “Go early vote, get it done!”

To learn more about Jordan and her campaign, click here. To vote for Jen, you can do it now. Elections matter. They have consequences. Vote!

Stars Who Urge Protestors To Vote To Affect Change: Photos