The phone calls and emails coming into Senator Mallory McMorrow‘s office are staggering. Women fearful about ectopic pregnancies, people worried about high-risk pregnancies, women frightened about what will happen if their birth control fails, constituents who have been through one round of IVF treatments ,because they want to start a family, and now don’t know whether they dare continue. All are terrified about what will happen if an old 1931 anti-abortion law goes into effect  in Michigan, McMorrow, a first term Senator tells HollywoodLife. in an EXCLUSIVE interview.  Ever since June 24, when the Supreme Court overturned Roe V Wade, which had given people the right to a legal abortion in America 50 years ago, McMorrow has seen the priorities for Michigan voters change.

“It’s so infuriating when we hear TV news pundits and reporters all around the country saying, ‘oh, you know this [abortion] isn’t that big an issue,'” McMorrow tells HollywoodLife in an exclusive podcast interview. “When they say that people are more concerned about ‘pocketbook’ issues, like inflation.” To the contrary, McMorrow, who represents a newly redrawn 13th state district outside of Detroit, sees that there is no more “fundamental decision than whether or not you’re going to have another kid. You want to talk about economic issues and pocketbook issues — this is the biggest one there is! You know the money it costs, just to give birth these days! ”

In Michigan, the 1931 law on the books makes it illegal for anyone to induce an abortion, so that could mean a doctor, a nurse, a pharmacist who sold prescription pills that could expel a fertilized egg from the womb, or it could mean women themselves, who took formerly legal prescription medication abortion pills, which could expel the pregnancy. It could mean taking a morning-after pill or even having an IUD. The law makes inducing an abortion a felony crime, punishable by up to four years in prison.

But that isn’t enough for Michigan’s current Republican-controlled state Legislature — it has introduced legislation to increase the penalty to up to 10 years in jail. Right now, there is a stay on the 1931 law thanks to quick action by Michigan’s Democratic Governor Gretchen Whitmer and Democratic Attorney General Dana Nessel, who asked the Michigan Supreme Court to put a hold on the law going into effect until the court could consider whether it violates rights guaranteed in the State Constitution.

But if a Republican takes the Governorship in the midterms, and if they win the Attorney General’s office as well, both candidates have vowed to make abortion completely illegal in the state. The GOP republican candidate for Attorney general, Matthew DePerno wants abortion to be illegal even to save the life of the mother. The law “is going to send a lot of women, girls, moms, and grandparents to jail,” warns McMorrow. The hope for pro-choice Michiganders is that an amendment placed on the midterm ballot will pass. It asks the state’s voters to make the right to an abortion be enshrined into the Michigan Constitution. 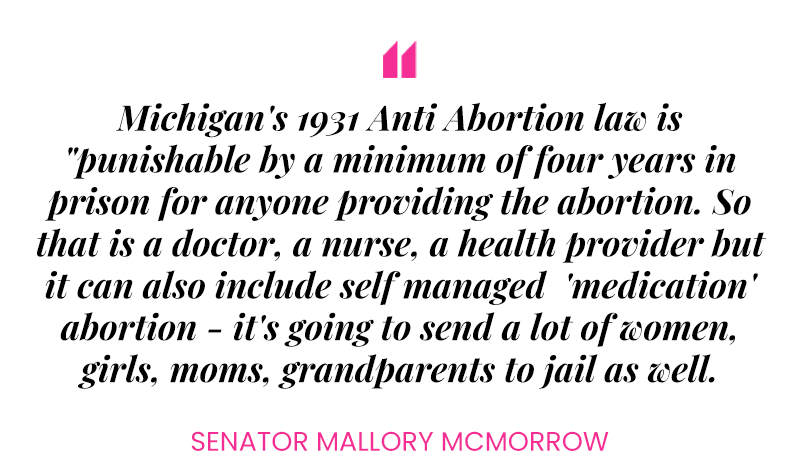 Seven hundred and fifty thousand Michigan voters signed this state petition asking that the amendment be placed on the ballot. The ballot’s petition required 450,000 signatures to get on the ballot, but “this is more signatures than any issue for any ballot measure in state history. So people are aware of what’s going to happen if our barbaric law goes into effect, and they are pissed and they should be,” McMorrow tells HollywoodLife.

As the midterms loom just five weeks away, McMorrow explains that Michigan is the perfect place to take a pulse on how the country is doing. She points out that the Republican candidates for Governor, State Attorney, and Secretary of State are all election deniers. “I firmly believe that the MAGA version of the Republican – and we hear President Biden say this – has to be defeated,” she asserts. “They don’t care about democracy, they don’t care about free and fair elections. The attorney general candidate  ( DePerno) is being investigated for (allegedly) stealing voting tabulators and taking them apart in videos.”

That’s why she thinks it’s so important for Democrats to talk to voters about how democracy is at stake in the midterm elections. “We still have people here trying to overturn the results of the 2020 elections and it wasn’t even close in Michigan. (Biden beat Trump by 154,188 votes.) We had 250 independent audits, we have paper ballots, we have a hard copy record of every single vote. So I think people want to move on and get back to talking about real issues where we can debate and not relitigate conspiracy theories over and over,” she confidently believes.

McMorrow says that fundamentally what the 2022 election is about in Michigan and throughout the country is “basic freedoms.” Freedom to “make your own decisions about your body, to walk around your communities and go to school without fear of violence. And of course, it’s about the economy.” But it was the MAGA fueled culture wars in Michigan that are what brought McMorrow to national attention.

A Republican state legislator who happened to be another woman – Senator Lana Theis – sent out a fundraising email accusing McMorrow of wanting to “groom and sexualize kindergartners” with absolutely no basis for any of her allegations. Mallory decided that enough was enough and determined that silence on her part would be a mistake. She hit back forcefully.

“I was legitimately angry, viscerally angry,” she relates. “She accused me by name of being a groomer, supporting pedophilia, and wanting eight year olds to believe they were responsible for slavery,” McMorrow sighs. “We’ve gotten to a place where one of our two major political parties is pulling out language from conspiracy theories and hate groups and are using it out in the open. And that is terrifying.” 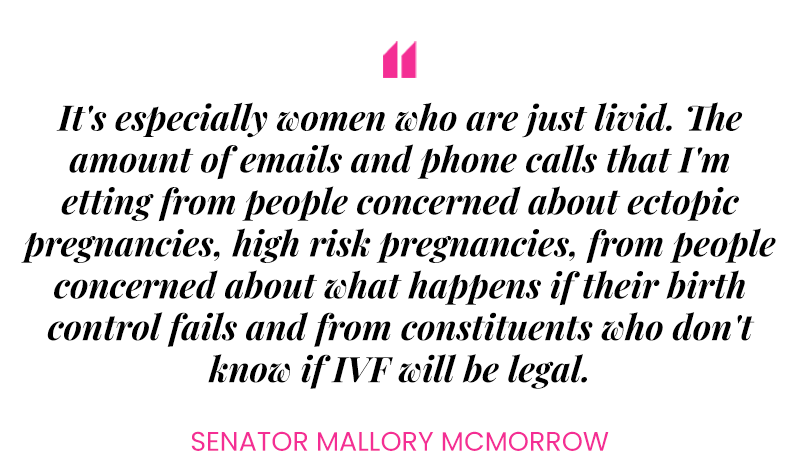 McMorrow’s outrage took her to the Michigan State Legislature floor where she gave an impassioned speech clapping back at Theis. “I sat on it for a while wondering why me and then I realized I am the biggest threat to your hollow, hateful scheme,” she addressed Theis in the legislature. “You dehumanized and marginalized me…you say ‘she’s a groomer, she supports pedophilia, she wants children to believe they were responsible for slavery and to feel bad about themselves because they’re white.”

McMorrow continued, telling the Legislature that, “my mom taught me at a very young age that Christianity and faith was about being part of a community, about recognizing our privilege and blessings and doing what we can to be of service to others, especially to  people who were marginalized, targeted, and who had less, often unfairly.”

Then McMorrow went straight at Theis and her Republican colleagues. “So who am I? I am a straight, white, Christian, married, suburban mom who knows that the very notion that learning about slavery or redlining or systemic racism, somehow means that children are being taught to feel bad or hate themselves because they are white, is nonsense. No child alive today is responsible for slavery…but every single one of us bears the responsibility for writing the next chapter of history.”

McMorrow’s finish to her speech encapsulated her mission as a state representative. “I know that hate will only win if people  like me stand by and let it happen. So I want to be very clear right now. Call me whatever you want, I hope it (the fundraising email) made you sleep good last night. I know who I am, I know what faith and service mean and what it calls for in this moment. We will not let hate win.”

McMorrow’s message got through loud and clear and not just in Michigan, but to millions across the country. The 36-year-old first time senator was flooded with $1 million in reelection campaign contributions from 11,000 donors from across all 50 states, according to McMorrow’s husband and treasurer, Ray Wert. Meanwhile, Theis’s false allegations netted her just $300 in donations.

Now, to be clear, Mallory McMorrow is exactly who she told the legislature, she is. She is the first-time mom of adorable year and a half old daughter , Noa, married to husband Ray. She has a rescue dog named Detroit and lives in Royal Oak, a suburban community outside Detroit, that is part of the district that she represents. And she is someone who has empathy for others who have been targeted and marginalized.

The culture wars created and inflamed by Republicans across the country and in Michigan against critical race theory, the teaching of history, books, and trans children and members of the LGBTQ community have infuriated her. “Yes, I have stood up with the LGBTQ community and in support of teachers and honest education,” she says. But what really drove home to her about the regular Republican cruelty and bigotry, was a question she was asked by a 15-year-old girl. She was visiting a high school in her district to speak to students when this young woman raised her hand.

“Her first question to me was, ‘I’m queer. Why does everybody hate us? Why does the state hate us?’ And it hit me like a ton of bricks, because I recognized that this attack lobbed against me, wasn’t really about me. But it felt like a warning shot that if you dare to stand up with ‘them,’ whoever ‘them’ is this week, that you can’t be one of us. You’re one of ‘them.’ So I wanted to respond in a way that took my identity back.”

McMorrow didn’t want in her Legislature clap back speech to be speaking necessarily to the LGBTQ community, or the Black community, or to anyone else who has been on the receiving end of targeted inflammatory attacks. Instead, she very intentionally wanted to “talk to people like me, and say, it’s on us. Just because you’re okay doesn’t mean that this is okay. We can’t constantly expect that those who are under attack, defend themselves without allies.”

Judging by the national attention and the donations she received, it’s clear that thousands of Americans really heard her message about the importance of standing up and being allies to those who are under attack. “It’s just classic scapegoating,” she says. “The entire strategy of the Republican party right now is to get you so angry and fearful towards somebody you may not even have met like a trans kid who just wants to play soccer. So you don’t even notice that they’re not doing anything to bring down inflation, fix gas prices, or lower healthcare costs. They’re just making you angry.

Well, hopefully McMorrow’s voters will be so angry about a potential Michigan abortion ban and threats to democracy that they will propel her back into office on November 8, as well as a whole spate of Democrats into the Michigan Senate. Thanks to an independent redistricting commission, the state is finally free from radical Republican gerrymandering. McMorrow has been fundraising and campaigning for Democrats throughout the state in hopes of flipping the state Senate blue. “I’m feeling really, really good about our chances.”

To learn more about Mallory McMorrow and her campaign, click here. To register to vote ASAP, click here.