Following the successful weekend debut of Thor: Love and Thunder, Chris Hemsworth shared an adorable retrospective on his Instagram on Monday (July 11). “Here [are] two pics of me and my daughter,” Chris, 38, captioned the photos of him alongside his and Elsa Pataky’s eldest child, India Rose Hemsworth. The first photo was taken during “the first time she was on set 11 years ago,” wrote the Marvel star. “The other is the most recent on Thor: Love and Thunder. She’s my favourite superhero.”

India Rose was born on May 11, 2012, so it’s likely that this first shot was taken during the making of Thor: The Dark World, which began filming in September of that year. In the second photo, Chris holds his daughter – now ten years old – in his arms for a pivotal scene in the newest installment, Love and Thunder. 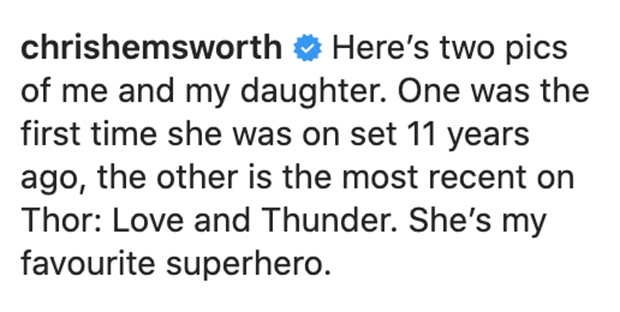 Actually, the new Thor movie features not one, not two, but multiple Hemsworths. [Minor spoiler alert]. Chris said in late June that one of his and Elsa’s 8-year-old twins, Sasha and Tristan, plays a young Thor. India plays “the character of Love,” said Chris, before adding. “It’s really cool. They really wanted to be in it.”

“It felt sort of like a one-off fun family experience,” added Hemsworth. “I don’t want them to now go and be child stars and actors. It was just a special sort of experience we all had, and they loved it. They had a great time.”

Having India in the movie “was not always the plan,” Thor: Love and Thunder director Taika Waititi told Marvel.com. “The idea started really when Chris was talking about [his daughter] India. And he was like, ‘Oh, you know, it would kind of be quite cool for me to be in a scene with my daughter.’ I started looking around like, oh, everyone has kids. All of these actors have kids.”

Chris reflected on his decade of being the God of Thunder in a June 27 Instagram post. “For over a decade, you have shown us that Thor is still worthy. We’re humbled and grateful to all of you who have been part of this incredible journey,” he wrote. “We can’t wait for you to see.” Apparently, the rest of the world was ready to see it: the film currently made over $303 million at the worldwide box office, and it’s only been out for four days.