Bronny James, 17, is growing up so fast! The teenager went to prom with a beautiful date, Peyton Gelfuso, and they took incredible pictures beforehand, which you can see here. Bronny looked handsome in his tux, which featured a blue blazer and black bowtie, along with bright blue shoes. Meanwhile, Peyton was effortlessly gorgeous in a strapless, white feathered gown with high leg slit, which she paired with open-toed white heels. The pair looked like the picture-perfect couple as they prepared for their big night at the dance. 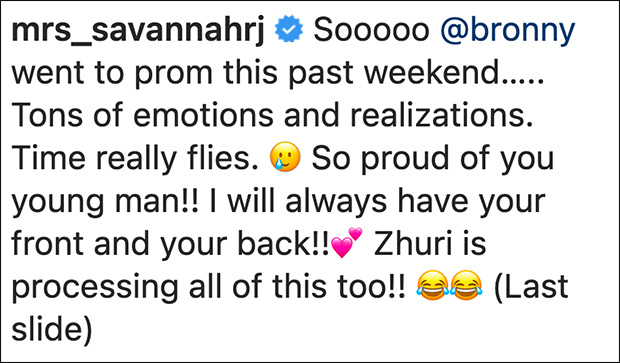 Meanwhile, Bronny’s mom, Savannah James, shared a series of photos from the 17-year-old’s getting ready process, as well. In one pic, she tied his bowtie, and in another, she fixed the collar of his shirt as he prepared to put his suit jacket on. “Bronny went to prom this past weekend,” Savannah wrote. “tons of emotions and realizations. Time really flies. So proud of you young man!! I will always have your front and your back!!”

Bronny is the eldest child of Savannah and LeBron James. The couple also has another son, Bryce, 14. and a daughter, Zhuri, 7. Bronny is following right in his dad’s footsteps as a basketball player. He currently plays at Sierra Canyon High School in Los Angeles, where he is finishing up his junior year. Bronny is expected to be recruited by some of the biggest basketball schools in the country when he starts looking at colleges next year.

In 2021, Bronny proved he’s well on his way to superstardom when he appeared on the cover of Sports Illustrated alongside fellow FaZe Clan members. FaZe Clan is a professional e-sports organization that Bronny is involved with, and he represented the company alongside some other FaZe Clan athletes on the June 2021 SI cover.

Earlier this year, LeBron opened up about the possibility that he could play with Bronny in the NBA before he retires. “My last year will be playing with my son,” he confirmed. “Wherever Bronny is at, that’s where I’ll be. I would do whatever it takes to play with my son for one year. It’s not about the money at that point.”

Related: LeBron James’ Wife Savannah: 5 Things To Know About Her & Their Marriage