Once the domain of pop and rock music, the Super Bowl Halftime Show has finally caught up with the rest of the world in celebrating the undisputable power of hip-hop. This course correction is due to the deal the NFL signed with Jay-Z’s Roc Nation in 2019, which resulted in the entertainment firm advising on the selection of artists for major NFL performances – and it doesn’t get any major than 2022’s Halftime Show. With Dr. Dre, Snoop Dogg, Eminem,Mary J. Blige, and Kendrick Lamar headlining, this year’s extravaganza is bigger – and more important – than ever. “The Pepsi Super Bowl Halftime show is going to represent musical excellence, artistry, and the spirit of Los Angeles,” Jana Fleishman, the Roc Nation EVP of Strategy and Communications, tells HollywoodLife in an EXCLUSIVE interview. “It’s aspirational and inspirational.”

Then above and beyond that, millions of people are going to witness superstars that have shifted and molded culture for generations,” Fleishman tells HollywoodLife. “This is hip-hop, the world’s most popular music, on the world’s largest platform.”

The NFL faced a backlash after casting a non-hip-hop act (Maroon 5) to play the Halftime Show for Super Bowl LIII, which took place in Atlanta, one of the many homes of hip-hop culture. Roc Nation made sure that the league wouldn’t make that mistake twice. “Los Angeles is the perfect place for Dr. Dre to showcase his artistic expression and creative freedom,” says EVP Fleishman, “so it was very fitting that the stars aligned for this moment in this city. This halftime lineup strikes a fine balance between paying homage to these cultural legends while also shining a light on their contributions to culture.”

Two of the legends performing – Eminem and Mary J. Blige – hail from outside of Southern California. However, as Jana reveals, this year’s show was both a chance to celebrate the music beating at the heart of LA and to give Dr. Dre a chance to do something magical. “The objective for this show was always to bring Dr. Dre’s artistic vision to life,” she says. “Everyone knows that Dr. Dre is very meticulous with his creative and collaborative artistry, so he had very specific ideas for the execution of this performance and highlighting the versatility of all the artists on stage in a unique way.” 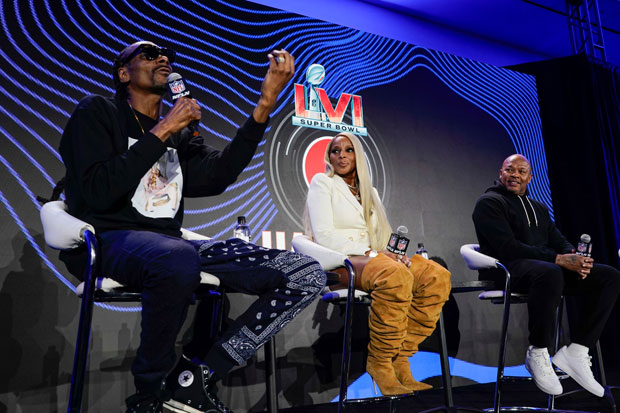 2020 began a new era for the NFL Halftime Show. After five years of non-POC pop headliners (Katy Perry, Coldplay, Lady Gaga, Justin Timberlake, and Maroon 5), the new decade kicked off with a celebration of Latin rhythm with Jennifer Lopez and Shakira’s spectacular. The Super Bowl LIV show also featured Bad Bunny and J Balvin, making sure reggaeton was well represented. The following year, The Weeknd brought R&B to the 50-yard line in a dazzling display of the sound that dominated charts, streaming services, and radio play for a year. Finally, thanks to Roc Nation’s work, the Super Bowl Halftime show is starting to have a more accurate reflection of America’s diverse and robust culture.

Earlier this week, Desiree Perez, the chief executive of Roc Nation, said that the Halftime Show represents a chance to “reach people that we normally wouldn’t reach with a message.” That message will be on full display in Super Bowl LVI’s show and in the years to come. “Roc Nation believes in excellence,” Fleishman tells HollywoodLife. “We want the halftime shows to be inclusive, representative of various cultures, and truly offer audiences a one-of-a-kind experience. At the end of the day, we work closely with each artist to ensure every single performance is true to them and wholeheartedly represents their vision.”