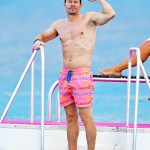 Dad jokes! Mark Wahlberg said he used to work out to ‘keep the boys away’ from his daughters — but now he’s working out with Ella’s BF to keep an eye on him!

Mark Wahlberg proved he is quite the jokester and quite the protective papa! The 50-year-old Oscar nominee shared a clip to his Instagram on January 8 where he hilariously introduced his fans to his 18-year-old daughter Ella’s boyfriend. During the video (below), Mark is in the middle of a workout when he addresses the camera. “I used to work out to keep the boys away from my girls,” he began, referencing Ella and her 11-year-old sister Grace. “And now I’m working out with the boyfriend,” Mark said, as he walked over to Ella’s beau and patted him on the back. “Imagine that.”

As any parent would know, that’s a sound strategy to keep an eye on the person dating your kid! Mark certainly got the thumbs up from his followers. Mario Lopez commented, “Heyyy keep ‘em close. Smart,” while Octavia Spencer shared four heart emojis. Even Ella, who could have been totally embarrassed by the dad move, cosigned the clip, writing, “Luv u dad.”

This isn’t the first time Mark has brought up his eldest child’s love life. During a 2017 interview on The Graham Norton Show, Mark told the hilarious anecdote about one of Ella’s first dates, who turned the tables on the former rapper. “You want to hang out with him? I wanna meet him, and then you can hang out with him in a safe environment,” Mark said. “All of a sudden, this kid comes over, and he one-ups me: he brings his mom.” 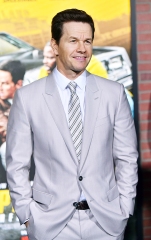 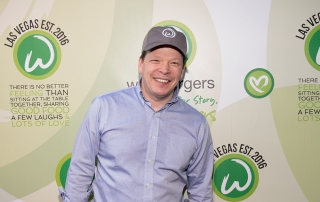 Mark and Ella certainly have a close bond, as her birth in September 2003 was the same day his sister Debbie died at the age of 43. On Ella’s 18th birthday, Mark shared a photo of himself and Ella alongside a photo of himself and Debbie. “Happy B day my Ella. 18 years old wow how time flies. So proud of you!!” he captioned the heartbreaking post. “Always A bittersweet day. Missing my big sister Debbie Ella’s Guardian angel.”