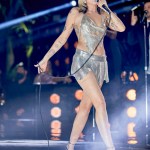 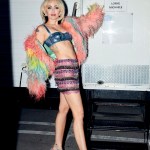 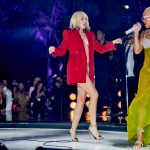 Oh Miley! The “Malibu” songstress proved she was a cut above the rest, rocking a sexy black jumpsuit for her late-night appearance.

Miley Cyrus, 29, made sure she was the center of attention while making an appearance on The Tonight Show Starring Jimmy Fallon with Pete Davidson, 28, on Dec. 9. The former Disney starlet sizzled wearing a form-fitting black jumpsuit. The alluring look featured two sexy side-cut outs and a sassy knot over her center while expertly highlighting her silhouette. Amping up the drama, Miley wore a pair of sassy blue and gold heels which matched the gold bangles on her wrists. She went edgy with her beauty look, streaking her mod blonde locks with black.

During the show, Miley took the stage to perform a rendition of Yvonne Fair’s “It Should Have Been Me”, lamenting the fact she missed her chance to date Pete. The comic is currently romancing the one and only Kim Kardashian, 41.

After belting out the title, she asked, “Pete Davidson, how you gonna do this to me? It should have been me in that Lamborghini leaving that nice a– restaurant.” By that point she’d sauntered out and stuck out her leg in front of Pete and begged, “I want to watch a movie in freaking Staten Island…oh yeah, it should have been me.” 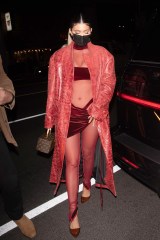 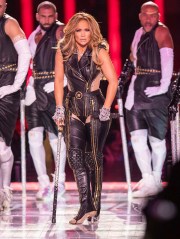 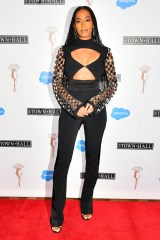 While Pete and Miley aren’t together, they are still close friends. During the interview, the duo also revealed they got matching tattoos back in 2017. “It was a very dark time in our lives…for me personally,” Pete admitted, revealing that the ink read, “We Babies.” Pete revealed that he had the inked removed while Miley said she was still rocking the ill-conceived design on her ankle.

The duo is teaming up to ring in 2022 with a New Year’s Eve special. They’ll co-host Miley’s New Year’s Eve Party in Miami, Florida on Dec. 31 2021. The Lorne Michaels-produced show, which will air on NBC and Peacock, will feature performances with Miley and several other yet-to-be-confirmed talents.