Decades after working together, Drew Barrymore’s bond with Whoopi Goldberg is still going strong. The ‘Boys On The Side’ costars reunited on Drew’s show to talk about dating, the holidays, and more.

“How it’s started vs. How it’s going!” Drew Barrymore captioned the photos she posted to her Instagram on Tuesday (Dec. 7), showing a still of her alongside Whoopi Goldberg from the film Boys on The Side and a photo taken from that day’s episode of The Drew Barrymore Show. Drew, 46, and Whoopi, 66, worked together on the 1995 comedy-drama, but as Drew said on the show, their friendship started long before that. “I have known Whoopi since I was eight years old,” said Drew. “We met on the set of The Color Purple.” “Yes, we did,” said Whoopi. Drew was visiting the film’s director, Steven Spielberg, met Whoopi, and a lifelong friendship was formed.

“Well, a lot of your life,” corrected Whoopi, who said her daughter, Alex Martin, is roughly Drew’s age. The two discussed how their paths were connected – especially when Whoopi performed her “Black E.T.” stand-up bit for Steven, the actual director of E.T. (which starred a young Drew Barrymore.) Despite all the voices in Whoopi’s head telling her not to perform the bit, she did, and Steven “laughed and fell on the floor.”

Drew brought up Boys On The Side – “It still holds up,” said Whoopi, “It’s a sweet movie” – and Drew said that she had the best time filming the movie with Whoopi and Mart-Louise Parker. She also spoke about how the film’s director, the late Herbert Ross, was “bragging” about this new actor he found. “[He kept] saying, ‘you have to check this guy out. I found him. I discovered him. He’s been in like, one or two movies. And it’s Matthew McConaughey!” “Who knew?” said Whoopi. 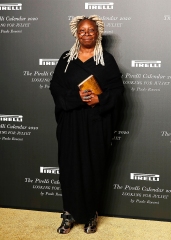 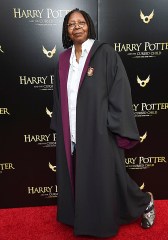 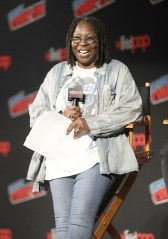 During the visit, Drew brought up how she’s sworn off dating. She and her third husband, Will Kopelman, called it quits in 2016. “I’m on a dating app, and sometimes I’ll swipe by, and this 35-year-old guy will run by. I’m 46, and I’m like I already have two children, I don’t need another,” she said, referring to her daughters, Olive, 9, and Frankie, 7. Drew brought up the age difference, and Whoopi noted that it “cannot be five years.”

“You cannot make the distance five years,” continued Whoopi (h/t ET Canada). “You can’t because if they are five years younger than you, there’s a whole section of time that’s gone that makes it difficult. I once had a partner who said to me once, ‘I did not know Paul McCartney had a band other than Wings.’ He was young. And I said, ‘Umm, so you don’t know much about The Beatles?’ and then he said it, ‘Who are The Beatles?’ And that’s too young.”