“This might be my favorite single of the year,” Sheyda tells HollywoodLife when speaking about “Won’t See Me Crying,” the new single from Nashville-based singer-songwriter. “Won’t See Me Crying” is a modern soul classic that showcases Sheyda’s skills as a songwriter and her talents as a dynamic vocalist. “Even though you made a wreck of me / You’ll never know you got the best of me,” she sings before delivering the chorus about persevering after a lover has done her wrong. “You won’t see me cryin’ today / Cuz I know you’d want me to / Think of you, break in two / Lay down and die.”

Though that last line might lead the listener to think “Won’t See Me Crying” was inspired by Gloria Gaynor, Sheyda explains in an EXCLUSIVE interview that this song came about thanks to another icon. “We wrote [it] on the day Aretha Franklin died,” she said. Sheyda and her writing partners met up and were shellshocked by the news that the “Queen of Soul” had passed. “We all kind of walked in the room and were like, ‘holy…’ We had all just seen the news, and it was this weird moment. And it was a rainy day, and I was going through kind of a really shitty time with a guy  — as we all do.”

“So, I was like, ‘let’s write something that Aretha would write.’ Like, just kind of in her vibe, that that classic sound. Let’s write a heartbreak song,” says Sheyda. “It was kind of the perfect storm. It was such a pretty song. We wrote it with three-part harmony. And it was really cathartic for me. And everybody who hears it is like, ‘this is my favorite. This is the one.’ It sounds completely different than everything I’ve done — which seems to be my theme. I do something different every time.”

That versatility has been in the spotlight for the entirety of 2021. Sheyda (born Sheyda Fassari) has turned the past twelve months into a series of first impressions, introducing a new facet of her musical personality with each new song. With “The Dragon,” she seamlessly stitches together soul and southern rock in a tale about facing down your addiction. “GtG” is a modern country jam about being the baddest in the room. Her pop bop “Wish I Could Want You” is perfect for those who need help cutting their losses when love goes sour. And, with “Lungs,” she channels a story about trauma and survival into an anthem for those who have sadly experienced similar circumstances.

“I love therapy. I’m a big proponent for going out there and seeing somebody and confronting the things that are happening within you. Love therapy, huge fan therapy,” she says when discussing her music-making process. “But I will say, songwriting has its own level of catharsis and its own way of cleansing you. When you are able to put words and sounds to the things that are happening within you and do it in a way that others can experience it and take their own healing from it? It’s a really powerful thing. And I’ve always wanted to do that with my music, to be a positive voice that allows others to feel and experience in the way that I felt and experienced music from a very young age.”

“When I wrote ‘The Dragon,’ it was the day that I got the phone call that the person I loved needed to go to rehab,” she continues. “And it was a hugely cathartic deal to walk in the room and say, ‘shit, this just happened. And these are my feelings about it. And these are the chords that feel good with that.’ And then bring it even more to life when we went into the studio about it. But, you know, therapy is great, but music is a catharsis for me.”

Sheyda has gone through a lot to get here. “I actually had to overcome stage fright,” she says. When she speaks with HollywoodLife, she’s about to shoot the music video for “Won’t See Me Crying,” and she’s a bit nervous. “I have to pretend I have a boyfriend in this video,” she says with a charm that you find with her music. “And I’ve never – I’ve done like, acting like a kid in high school. But I’ve never done like, an actual video camera in my face.” Yet, she’s been able to get over stage fright – “I love being on stage,” she says. “It’s a really fun time for me” – and a more dire challenge.

“When I moved to Nashville, I was diagnosed with nodes [on her vocal cords],” she says. “And I couldn’t perform. It was like four or five years where I didn’t get on stage.” After she underwent surgery to have the nodes removed, she feared she would never sing again. “My voice changed, and the way I use my voice changed. And I was terrified to get on stage. “I was like, ‘I don’t know that I can do this anymore. I don’t know that I meant to be a performer. Maybe I’m just a songwriter. Maybe I need to be in management.'”

Thankfully, she had some help to nudger her – metaphorically – back out on the stage. “My mom has always been the kind of person who’s like ‘bite the bullet. bite the frickin bullet and just do it.’ And she pushed me, and I’m so happy I got over it and moved past it. But the first time I got back on stage was at a place called The Listening Room in Nashville, which – it’s famous here. But everyone is quiet. They sit and watch you quietly, and they eat dinner, and they just kind of stare. And I walked out on the stage shaking, just shaking. And that was like, ‘I don’t know if I’m able to get words out. I don’t know if I remember the song. What are we singing what’s happening here?’ ”

“When I walked off the stage. And I was like, ‘that was in hindsight, not the greatest decision’ as far as like a first time back kind of thing. Like I should have gone to a writer’s round where no one paid attention so that I could just screw up and have no one care and said I chose a giant silent roomful of people.” But, going big and diving headfirst has become another staple of Sheyda’s blossoming career. 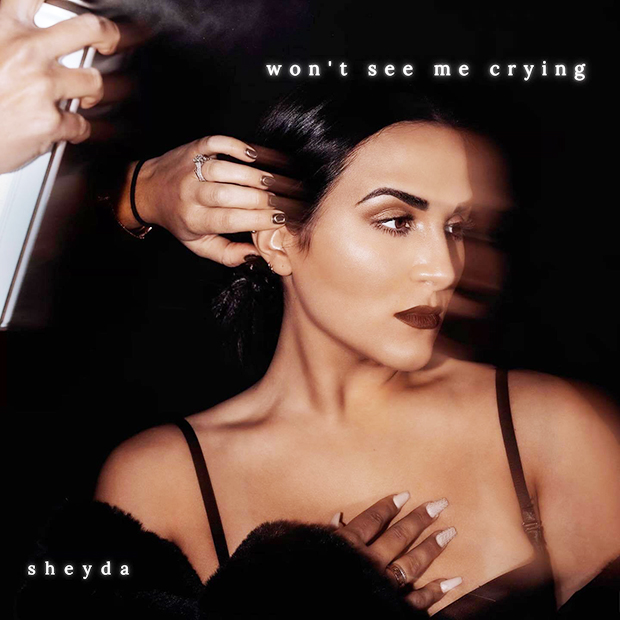 “I had spent years trying to write what I thought other people wanted and sound the way other people wanted,” she recalls when remembering releasing “The Dragon” as her debut single. She had meetings with labels who were already discussing slotting her in as the next pop artist, but the last thing Sheyda wanted was to be put in a box. “Putting out ‘The Dragon’ was that big moment,” she says. “I’m just gonna put it out there. It doesn’t sound like most pop songs, or rock songs or anything, really. It has a lot of different elements. And I was like, ‘if people like it, then they like me,’ and I can’t apologize for being anything other than that.”

Sheyda has nothing to apologize for – and fans better get ready. Though 2021 was huge for Sheyda, 2022 will be even bigger. “I’ve been doing a lot of writing these past couple of months,” she says. “I am planning on getting back in the studio, basically, New Year’s Day, and working on several songs.” She plans to put together “the four or five releases we did this year” with a handful of new songs and release her debut album. “I think this in the books, nothing solid plan yet, but a lot of ideas are being tossed around. So I’m pretty excited.” And the world should be excited for Sheyda, too.

“Won’t See Me Crying” hits all streaming services on Dec. 3.