Saweetie brought the house down on ‘SNL’! The ‘My Type’ rapper looked sensational as she showed off her dance moves and performed her new song for the 1st time.

Saweetie, 28, brought the energy for her Saturday Night Live debut! The rapper opened with a couple of her biggest hits, including a jazz version of banger “My Type.” She stunned in a Cinderella style gown as she showed off her bright red hair on the Nov. 20 episode, giving us all the 1920’s showgirl vibes. The performance was an unexpected turn from Saweetie, who pulled it off with her two dancers effortlessly.

She then transitioned into “Best Friend” — her collaboration with Doja Cat — which was a massive hit over the summer! Her dancers stripped off her long blue skirt to reveal a mini dress with a bedazzled bustier top and fishnet stockings. Just as the beat hit, Saweetie didn’t miss a beat to the bar-style choreography which included plenty of slow writhing and twerking.

The California native, née Diamonté Harper, has been teasing her new single “Icy Type” all week. Saweetie dropped a visual teaser for the track a day before her performance, featuring a short audio clip playing over a vide of a digitized snowflake rotating. “Twerk that ass for a icy chain (Hmm),” she says in the chorus, before addressing a lover in the first verse. It’s unclear if she means ex Quavo, who she dated from 2018 until early 2021. 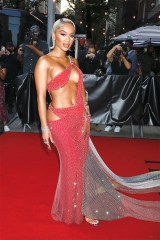 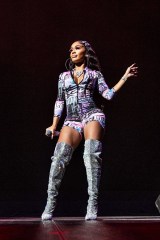 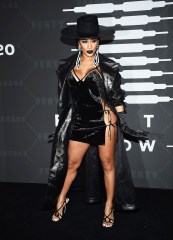 She came back out for her second performance, dancing in front of a huge light display that read “ICY.”  She swapped out her blue outfit for a strapless white bustier and white mini skirt. She layered tons of diamond necklaces over top as she bounded along to the catchy beat reminiscent of ’90s hip-hop.

“My hair, my money, come bundle/I spent your rent on my frontal (Yeah)/Bitches see me and get humble,” she says, before dropping references to her Crocodile “Birkin Bag” and “mink” on her body. The catchy tune was produced by Dr. Luke, Rocco Did It Again! & ​lil aaron and is set to appear on her 2022 album Pretty Bitch Music. The project also includes hit “Best Friend” with Doja Cat, and “Back to the Streets” featuring Jhené Aiko.

Earlier this week, Sweetie appeared alongside host Simu Liu, 32, for a series of hilarious promos. In one, it came out that the rapper had been “engaged” to cast member Kyle Mooney. “Hello Kyle,” Saweetie wryly said on-stage, as he returned the tone. “Hello Saweetie,” he added, prompting Cecily Strong to ponder what was going on. “Do you two know each other?” she asked, as Kyle replied, “We did…until she broke off our engagement!” Talk about drama!