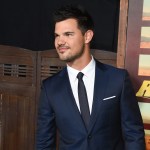 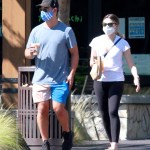 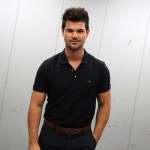 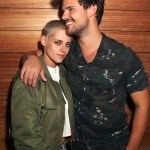 Taylor Lautner proposed to his GF of three years! The actor declared that ‘all of his wishes came true’ in a sweet post sharing photos from the romantic moment!

Taylor Lautner is off the market! The 29-year-old actor popped the question to his girlfriend of three years, influencer and registered nurse Tay Dome, 24. “11.11.2021,” he began his caption, shared to Instagram on Saturday, Nov. 13. “And just like that, all of my wishes came true,” he added. The Twilight alum wore a dapper black suit as he got down on one knee in the photos, holding a ring in front of a surprised Tay.

The YouTube star appeared emotional as she put her hands over her mouth, looking down at the ring. Tay was barefoot in a cheetah print dress as she kneeled down to embrace her fiancé in the stunning photos, which also captured Taylor’s impeccable decor! Rose petals were sprinkled across the fireplace lit room, accented with white candles in glass cases. A red light sign reading “Lautner” behind them — soon to be Tay’s new last name, as well.

Tay, who boasts over 100,000 followers on Instagram and nearly 10,000 on YouTube, also posted moments from the proposal for her followers. “my absolute best friend,” she penned, sharing just the photo of her kneeling down to embrace him. “I CANNOT WAIT TO SPEND FOREVER WITH YOU,” Tay also wrote in all caps, clearly emotional and excited about the life milestone.

The couple were first romantically linked in Sept. 2018, following his split from ex Billie Lourd, after they attended a wedding ceremony together. Shortly after the spotting, they took their relationship Instagram official with a Halloween costume post (the spooky holiday has remained an important one for the duo, who share costume photos annually and also threw a joint Halloween party this year). The pair met through his younger sister Makena Lautner over three years ago, and have since traveled the world together!

Notably, this is Taylor’s second romantic partner of the same name: he also dated Taylor Swift, 31, from Aug. 2009 to Nov. 2009 after meeting on the set of film Valentine’s Day. He’s also been linked to Selena Gomez and Lily Collins.