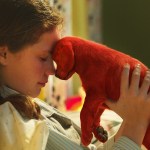 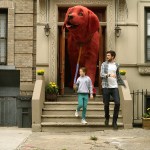 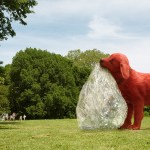 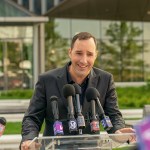 A new generation of ‘Clifford’ has arrived. HL spoke EXCLUSIVELY with ‘Clifford the Big Red Dog’ star Darby Camp about acting alongside a ’10-foot’ puppet, playing Emily Elizabeth, and more.

Clifford the Big Red Dog’s legacy continues with the all-new live-action movie, which is being released on November 10. Darby Camp stars as Clifford’s beloved human pal, Emily Elizabeth, and the two go on quite the adventure in New York City. HollywoodLife spoke EXCLUSIVELY with Darby about how Clifford was brought to life while filming.

“There was an actual 10-foot dog-like puppet,” Darby revealed. “It looked so cool. It looked like a dog. I mean, it didn’t look identical to a dog, but it had a dog shape. There was like the head and shoulders and then the back end of the puppet. There were two puppeteers portraying him, and they studied a dog’s emotions and movements. During the scene, they were controlling him. It really felt like there was a dog there, so it was pretty easy. Not as easy as it would be to have a real dog but actually maybe even a little easier because a dog might be a little too hard to direct.”

The young actress admitted that she “wasn’t really 100 percent sure what to expect seeing it done and seeing how Clifford would look. I knew that there was going to be a giant red dog, so I was expecting that. After seeing it finished, I was just so excited. Like sitting there watching it, I was almost giddy and so excited to see how it finally turned out. The dog looks so amazing. There’s so much work and talent that goes into creating this live-action giant red dog.”

When the movie was filmed, Darby was just 11 years old. She turned 12 years old on set, and now she’s 14. Just like so many kids, she “loved” the Clifford books and the animated series. Like Clifford, Emily Elizabeth is a classic character in her own right.

“I’m very honored,” Darby said about playing Emily Elizabeth. “I just feel so blessed because I know that this is a character that everyone grew up reading about and will be excited to see. There’s a little bit of pressure there, but I’m mostly excited for people to see my work and how I portray her. It was two or three years ago almost. I’m even excited to see how I did it then because I’m like a totally different person now.”

As for how the Emily Elizabeth we meet in the movie compares to the character in the books, the Big Little Lies alum said, “We start off with Emily struggling at school with bullying and friends. She just feels so alone and lonely, and then she finds this tiny red puppy. The next morning after she finds him, he becomes his 10-foot giant red dog. She just has to figure out what to do, and we get to see how their relationship grows and how they meet each other for the first time to them at the end and how they are in the present.”

Darby works alongside comedian/actor Jack Whitehall, who plays Emily Elizabeth’s uncle. “He really is one of the funniest people out there,” Darby raved. “I think Mr. Jack was perfect for Casey. They have a lot of things in common. They’re both funny, and I really enjoyed working with him. He really is a comedian on stage and off. Jack and my dad really hit it off as well. They’re still friends, and we keep in touch to this day. He really was great to work with, and I really enjoyed meeting him. I also remember hearing about how he was friends with One Direction’s Niall Horan and Harry Styles, which I kind of started freaking out about.”

The movie will feature an exciting adventure for Emily Elizabeth as she seeks to save Clifford. “I really love that they added in that element of saving Clifford and people trying to take them away,” Darby told HollywoodLife. “Because I think no one really would expect that in the show. There are just so many different levels in the movie of comedy, action, adventure, and family. I think people are really going to love that.” Clifford the Big Red Dog will be released in theaters and on Paramount+ on November 10.