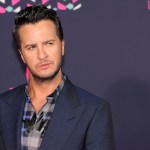 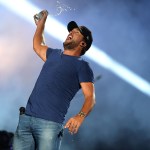 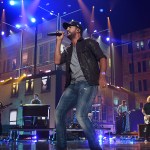 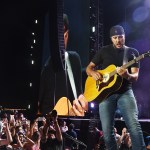 He may be a famous singer, but at his core, Luke Bryan is just a regular country boy — and he proved that he still has it in him by changing a tire on the side of the road!

Luke Bryan gave a fan the surprise of a lifetime when he stopped to help her fix a flat tire in Tennessee. Courtney Potts, 45, took to social media to share her experience with the country singer. She posted a video of Luke on his hands and knees, using his own jack to repair her flat tire. “Thank you again Luke Bryan,” she captioned the video. “I cannot thank you enough for helping me and my kids. It really made our day so much better!”

The country singer moved fast and definitely looked like he knew what he was doing in the video. Courtney said that she got the flat while driving on a curvy road on the way to her parents’ house with her two children in the backseat. She pulled over and stopped driving when, moments later, Luke also pulled to the side of the road to help. The American Idol judge was on his way to go hunting with his sons, Courtney said.

“He was like, ‘Hey, I almost hit you! This is a really bad road. We’ve got to get off of this curve,'” Courtney recalled in an interview with WKRN. “I knew his voice and I was like, ‘Okay, this is happening!'” The mother of two said that she played it cool to not make Luke feel “awkward” or uncomfortable about the situation.

“He didn’t act like a celebrity — not even a little bit,” she confirmed. “He looked just like anybody else that would’ve pulled over.” Plus, Luke got the job done in just 30 minutes. He also took a photo with Courtney and her daughter after helping out.

Now, the video of Luke’s good deed has gone viral, and Courtney can’t believe it. “I was just blown away,” she admitted. “It’s one of those things where you go….’What just happened?'”