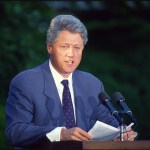 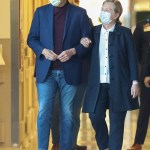 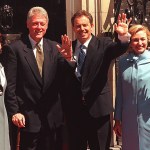 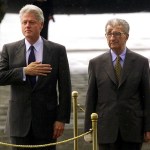 It was confirmed that Bill Clinton was admitted to UC Irvine for a ‘non-COVID related infection’ last week.

Hillary Clinton, 73, and her daughter Chelsea Clinton, 40, arrived at UC Irvine Hospital in California, where Bill Clinton remains in ICU. The former Secretary of State and her daughter was spotted stepping out of a vehicle as she held onto a Starbucks coffee and Givenchy bag on Saturday, Oct. 16. Hillary sported a black-and-white jacket, headband and protective face mask. Her daughter Chelsea kept a low profile as she appeared to walk in front of her mom, rocking a green baseball cap.

The visit comes just two days after Bill was hospitalized for a “non-COVID related infection,” per his spokeswoman. “On Tuesday evening, President Clinton was admitted ton UCI Medical Center to receive treatment for a non-COVID-related infection,” spokeswoman Angel Ureña said on Thursday, Oct. 14. “He is on the mend, in good spirits, and is incredibly thankful to doctors, nurses, and staff providing him with excellent care,” she also said.

It was later reported that the former president had been hospitalized for an untreated UTI infection, and was being treated by doctors Dr. Alpesh Amin and Dr. Lisa Bardack. “He remains at the hospital for continuous monitoring. After two days of treatment, his white blood cell count is trending down and he is responding to antibiotics well,” the pair said in a statement on the same day, confirming they are working with the former president’s medical team in New York City, as well. 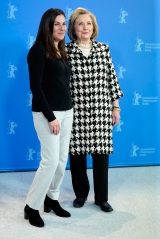 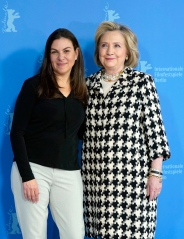 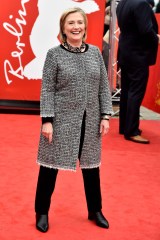 “The California-based medical team has been in constant communication with the President’s New York-based medical team, including his cardiologist. We hope to have him go home soon,” Dr. Amin and Dr. Bardack also said to media.

Bill has been open about his past health struggles, particularly his two heart surgeries. The Arkansas native underwent quadruple bypass surgery in 2004 at the age of 58. The four-hour procedure took place after Bill checked himself into New York Presbyterian Hospital due to chest pains and shortness of breath. His surgical team, led by Dr. Craig R. Smith, later confirmed that there were blockages in Bill’s heart at over 90%  along with major signs of heart disease. In 2010, Bill underwent another surgery to have stents inserted after chest discomfort.