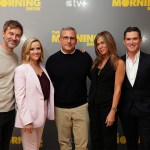 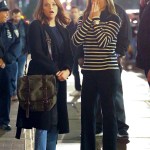 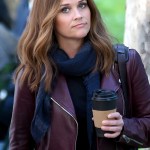 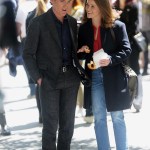 Stella Bak didn’t mince words with Alex Levy when she tried to convince her to the debate. HL spoke EXCLUSIVELY with Greta Lee about that tense scene with Jennifer Aniston, Stella’s ‘pure fantasy’ closet, and more.

Greta Lee’s Stella Bak has been the best addition to The Morning Show season 2. Stella has come to UBA on a mission to try and get it back on track. She’s faced challenges at almost every turn, but she remains calm, cool, and collected through it all. During the October 8 episode, Stella and Alex had a conversation that will change their relationship forever.

“I think that was an instance where we see someone like Stella, given her background and the tasks that she’s given at UBA, having to make certain decisions that are in support of more of her as a businesswoman and as a boss than maybe the part of her that wants to be a visionary and a change maker,” Greta told HollywoodLife EXCLUSIVELY. “That scene was really challenging in that personally, as just like a human person who’s a huge fan of Jen Aniston, knowing what was going to go down. I had to really almost be Method about my mindset here, but I found that one of the helpful things to draw on was when Stella is asking Alex, ‘Please step up to the plate and it’s you and it’s a huge responsibility, but we need you and we need you now.’ Having some element of myself feeling how much I have loved Jen for so long… I mean, she truly is a hero of mine. Having that just be a single thread for me in terms of my emotional approach to what Stella was going to have to ask her was really helpful in the end.”

She added, “I was really grateful to have Jessica Wu, who directed that episode, and she’s Asian American. It was so nice to have another voice who can also be there in terms of my concerns and making sure I wasn’t being too monolithic in my wanting to represent an Asian woman in this moment. Having her and knowing she had my back was so great because in that moment with Jen, too, it’s so much bigger than that. It’s really about two human beings with different agendas trying to connect.”

In the episode, Stella also has another major dressing room conversation with Daniel after his bizarre on-air performance. When Daniel walked out of the dressing room, he looked like he’d been kicked in the knees.

“We find out through a third party what was said, even though we never get to see that exchange,” Greta said. “And that is really heartbreaking what happens between them. I think that’s what’s so great about the show is that you can make certain assumptions about, okay, so all the people of color are over here and they’re all going to get along. They’re all best friends, and it’s this very pure thing where they all have each other’s backs in the name of diversity, but we see that it’s so much messier than that. And that’s not actually how things go down.”

One of the most fascinating and thrilling dynamics of the second season is the working relationship between Stella and Cory. These two have butt heads several times already, even though they’re supposed to be working in tandem with one another.

“I think I was really excited about the possibility of investigating a real work relationship,” Greta told HollywoodLife. “One that’s not romantic, but it’s this idea of having a work spouse. Even that, I guess, is maybe like a misnomer for this, but the two of them are so interesting to me because on paper, they could not be more different. They’re completely different animals, but then we see along the way, maybe they’re much more similar than we think. In some way, in some cosmic way, could they be like the same person but just manifested totally differently? I thought all of those questions are really interesting in watching how they each kind of execute their agendas, respectively. Like, how they were going to do it. I’m so glad that Stella gets to push back against him, but then there are also changes that happen where there are elements where he does become more of a mentor. Even though maybe he was treating her as more of a token without realizing it. It’s great to see how they continue to coexist and fight for similar things in totally different ways.”

One of the most defining aspects of Stella is her impeccable style. Greta loves Stella’s “bold” style that is such a reflection of her identity.

“I cannot take credit for that wardrobe that is Sophie [De Rakoff], our costume designer. Her construction of this wardrobe… I mean, first of all, for a show that’s so firmly rooted in reality, that closet is pure fantasy,” Greta admitted. “I’ve never, ever in my life wanted so badly to just pilfer everything and just run away and never come back with all of it. It’s Chanel, Balenciaga, Prada, Stella McCartney, Gucci. It was insane, but it was appropriate because it was the manifestation of Stella and how she perceives herself as the boss she’d like to be and is. It’s bold and a big flex. She’s like, I’m the boss. She pushes boundaries with her choices in terms of what a boss can look like. I found it so great those moments where she shows up wearing a lavender Adidas suit. She never wears heels, ever. She will wear a chunky Prada sneaker, but she is very immovable in terms of how she wants to appear and her own identity, which I think is so great.” New episodes of The Morning Show drop weekly on Apple TV+.