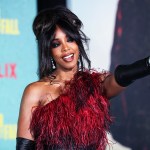 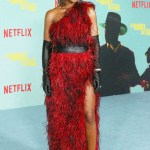 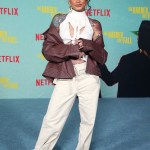 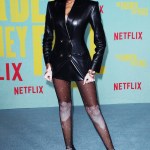 Leni Klum rocked a black mini dress while posing for photos with dad Seal at the LA premiere of Netflix’s ‘The Harder They Fall.’

Heidi Klum‘s 17-year-old daughter Leni made a rare red carpet appearance with her adopted father, Seal, on Wednesday, October 13 at the premiere for the new Netflix Western film, The Harder They Fall. Leni and Seal, who has raised the rising model with Heidi, 48, since her birth in 2004, posed for photos together on the carpet at The Shrine in Los Angeles. The pair were there to celebrate the new film, which Seal contributed to the soundtrack of alongside JAY-Z and Lauryn Hill.

As expected, Leni looked absolutely stunning — and just like her mother! — for the star-studded affair. She rocked a black minidress that had a tasseled hem, as well as stylish black heels. The teen added to her fashionable look by leaving her long blonde hair down to reach her waist. Leni also brought along her boyfriend, 18-year-old hockey player Aris Rachevsky, to the event.

Meanwhile, Seal looked dapper for his big night out. The “Crazy” crooner wore a black coat, black pants, white button up, and black and white tie. He looked overjoyed to be pictured with Leni, who wrapped her arms around her famous dad as they posed together on the carpet. The pair, plus Aris, were joined by the likes of Kelly Rowland, Tina Lawson, Regina King, Tiffany Haddish and more at the Netflix premiere. 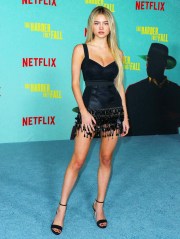 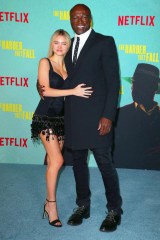 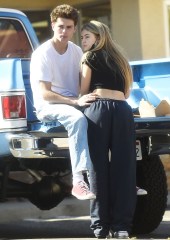 Leni is Heidi’s daughter with ex Flavio Briatore. Flavio was never involved in Leni’s life growing up, and so Seal really has been her father figure since birth. Leni has ventured into modeling (guess it runs in the family!), and despite her young age, she’s already hit a number of career highs. Most notably, the teen made her Vogue debut on a joint cover with Heidi in December 2020 on the brand’s German edition. Months later, Leni appeared solo on a cover of the German Glamour.

In a March interview with E!’s Daily Pop, Heidi revealed that Leni had “been begging me for years” to model. Heidi said she initially hesitated to allow her daughter to do so, but once Leni turned 16, she gave her approval. “I’ve seen her walk in heels around the house, but never professionally,” Heidi admitted, adding, “It’s kind of different when all of a sudden you look at your child like that and you’re like, ‘Wow, who is this?’ “